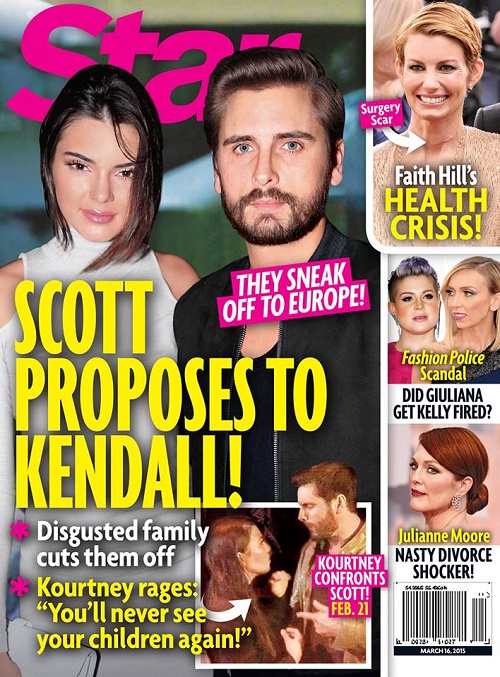 We can’t Keep Up With The Kardashians – Kendall Jenner is engaged to Scott Disick! Or so claims the March 16th cover of Star Magazine. A few weeks ago the tabloid broke the story that Scott was cheating on Kourtney Kardashian with her little sister Kendall, then they reported Kendall was pregnant with Scott Disick’s baby. Now, apparently Scott and Kendall are getting married!

The March 16th cover of Star Magazine shows a photo of Kendall Jenner and Scott Disick posing together, and the headline screams, “Scott Proposes To Kendall: Disgusted family cuts them off, Kourtney rages ‘you’ll never see your children again,’ and they sneak off to Europe.” Star is determined to make this imaginary love story between Scott and Kendall stick – and no one is buying it. Scott proposed to Kendall Jenner? The same Scott that has been “dating” Kourtney for nine years and after three children still wouldn’t commit. And, then there is the fact that Kendall Jenner is a high-fashion model and jet-setting to foreign countries where gorgeous wealthy men are falling all over each other trying to get her attention. Why would she want her sister’s deadbeat baby-daddy, a man that gets so drunk he wakes up every morning in his own urine and vomit?

In other gossip news, The March 16th issue of Star Magazine teases an article on all of the drama going down at E! Network’s “Fashion Police,” and apparently Kelly Osbourne got Giuliana Rancic fired from the TV show. At this stage in the game – no one has even confirmed that there will still be a show, so we’re not losing sleep over who will or will not be the host.

Country singer Faith Hill apparently had a major health scare and Star has photos of her scars. Also, Star’s cover reveals that actress Julianne Moore is currently embroiled in a messy divorce.

So, are you as disturbed as we are about the thought of Kendall Jenner and Scott Disick together? On a scale of 1-to-Kanye, how crazy is Star’s story? Do you think there is any truth to it? Feel free to rant about how ridiculous it is in the comments below!