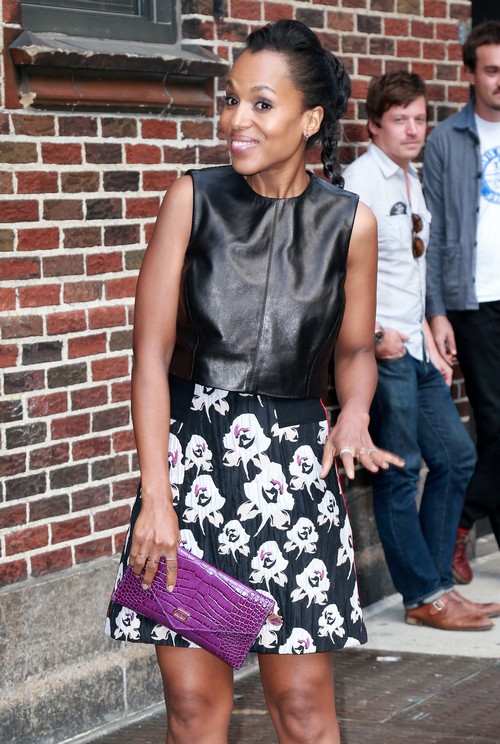 Scandal star Kerry Washington seems to have everything together, but behind the scenes the actress and mother is hot mess – and living in constant fear that she may have cancer. Kerry’s mother fought a brutal battle with breast cancer and survived, now Kerry is certain that her genes are stacked against her and she too will be diagnosed with the deadly disease. It’s one thing to be worried or even proactive, but according to the National Enquirer – Kerry is literally obsessed with the thought of dying from cancer.

An inside source dished to National Enquirer, “Kerry has been ultra-dilligent about getting regular check-ups, mammograms, and screenings, but all of the fear and anxiety is putting an added strain on her immune system. But she still can’t shake the dread that she will one day be diagnosed with cancer. Al the stress is rough on her health.” Kerry also has multiple severe food allergies – which the source also says is taking a toll on the busy actress.

Convincing herself that she has cancer isn’t the only thing stressing out Kerry Washington. According to the tabloid, her marriage woes are taking a toll on her as well. Apparently, not all is well between Kerry and her husband Nnamdi Asomugha, and the parents of 1 year old Isabelle are currently in couple’s therapy and on the verge of a break-up. Nnamdi and Kerry have been reportedly bickering over her busy career, his lack of career, and of course her obsession with cancer.

Do you think that Kerry is being a bit paranoid, or is it time that she relax and take some time off from work? Do you think she and Nnamdi will break-up, or will they get through this rough patch? Let us know what you think in the comments below!