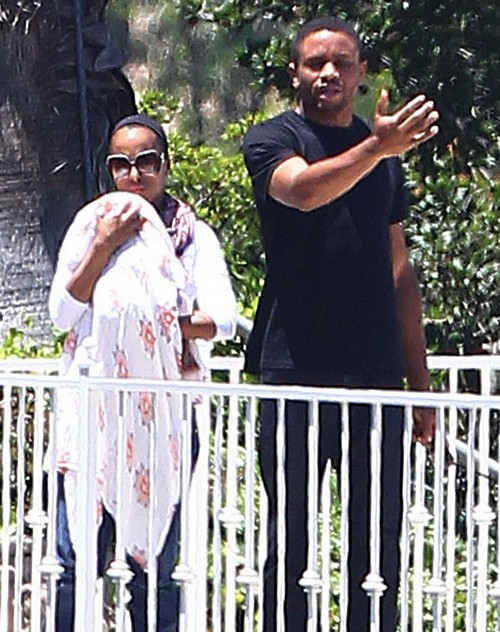 When Kerry Washington first married retired NFL player Nnamdi Asomugha, most Scandal fans [and really, people everywhere] were shocked about the news. Even apart from the fact that most people were ‘shipping’ Kerry with Tony Goldwyn [who plays her love interest on the show], Kerry’s marriage to Nnamdi came as a surprise because most people didn’t even know that she had a boyfriend.

However, a new report from Radar Online claims that despite Kerry’s best attempts to keep her marriage away from the media, her success has started taking a toll on her relationship. Apparently, Kerry Washington and Nnamdi Asomugha are now in private couple’s therapy after Nnamdi became ‘threatened’ by Kerry’s massive success.

A ‘source’ tells Radar, “The root of the problem is that Nnamdi feels threatened by Kerry’s success. Nnamdi’s bitter because he feels he should be the breadwinner.”

So now, Nnamdi Asomugha and Kerry Washington are going to couple’s therapy [or couple’s counseling, whatever you’d like to call it] to seek professional help to fix their marriage. And who’s brilliant idea was this? Kerry’s famous friend, Gwyneth ‘Goop’ Paltrow.

Radar’s source adds, “Kerry’s close friends with Gwyneth Paltrow. She’s urged Kerry and Nnamdi to tackle their issues head on. She’s hoping couples counseling can help them overcome their problems before things reach the point of no return.”​

Hmmm…. is Gwyneth Paltrow the best person to take relationship advice from? She and Chris Martin did ‘consciously uncouple’, after all. But then again, she has had the most amicable divorce that Hollywood has seen in a long, long time, so maybe she does know what she’s talking about.

What do you guys think about Nnamdi Asomugha and Kerry Washington going to couple’s therapy? Do you think it will actually repair their issues, or will it only prolong the inevitable divorce? Let us know your thoughts in the comments below.