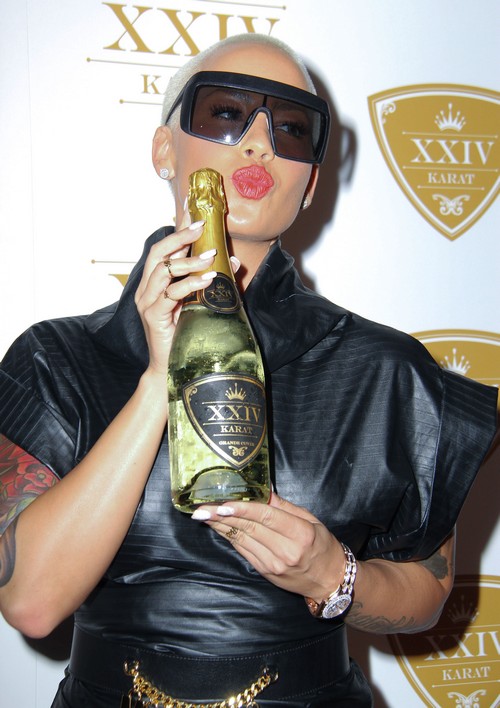 Khloe Kardashian may have started a Twitter feud with Amber Rose this week…but Amber Rose intends to finish it. Khloe opened a can of worms online when she began ranting about Amber Rose’s interview with Power 105, because Amber dissed her little sister Kylie Jenner’s relationship with rapper Tyga. But the Kardashians and Amber Rose have a long history – and Amber was just waiting for the opportunity to finally get to speak her peace about the reality TV family. Khloe’s tweets about Amber Rose escalated quickly, and Amber snapped back dissing Kim Kardashian’s sex tape with Ray J and calling her a whore, and then joked that Khloe’s father was a murderer – OJ Simpson (which is a notoriously sore subject for Khloe).

For those of you who don’t remember, Kim Kardashian actually stole Kanye from Amber Rose, and there has been bad blood between the model and the KUWTK crew ever since. Amber Rose is far from done with the Kardashians though, if the feud continues to escalate the Philly native has no qualms about fighting dirty – and she plans to disclose Kanye West’s penis size and dirty details about him that he and the Kardashians have been keeping under wraps.

According to Naughty Gossip’s inside source, “Kanye didn’t allow her to have a voice and she isn’t afraid to admit it. She knows everything about that man and is going to spill it all. She will tell everyone his penis size and what he likes doing in bed if this drama doesn’t end soon.” What Kanye likes to do in bed? Well, we already know the rapper has a serious leather fetish – we can only imagine what he likes to do behind closed doors. 50 Shades of Kanye anyone?

Have you been following Amber and Khloe’s Twitter feud? Do you think that Amber Rose has crossed a line, or is Khloe at fault for starting it? No really – do you even want to know what Kanye likes to do in the bedroom? By the time Amber and Khloe are done, they are going to do some serious damage to each other’s image…and Kanye’s.