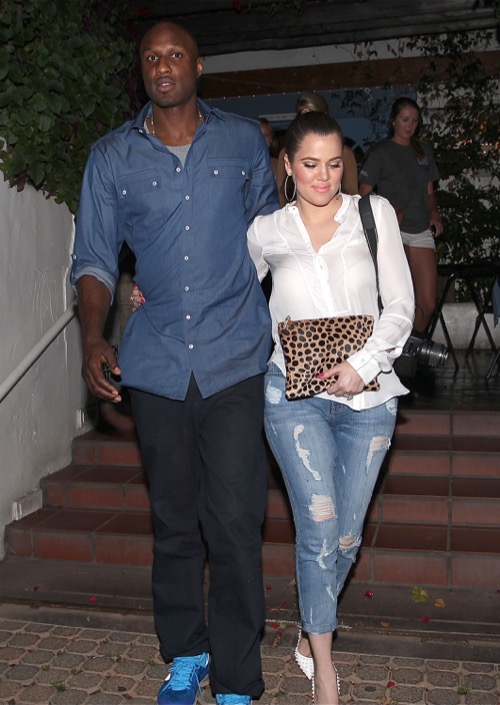 Did Lamar Odom tell Khloe Kardashian to stay away from his hospital room? According to some recent rumors, the former NBA player is upset that Khloe might be using his crisis for publicity and unloaded on his estranged wife.

Apparently Lamar was really angry after reading Khloe Kardashian’s cover story with People magazine. A brand new US Magazine report shared that Lamar Odom feels like Khloe used his situation to further her own career. Now Khloe Kardashian is getting way more press than her sisters and Khloe is more popular than ever.

In the issue, Khloe admitted that she would always love Lamar Odom but was quick to make it clear that there is no reconciliation. Khloe said, I believe when you love someone, you are allowed to love from afar. You don’t have to be with that person in order to love him.”

Khloe Kardashian stayed by Lamar Odom’s side 24/7 while he was in the ICU. It wasn’t until Odom’s medical prognosis was looking much better before the “Keeping Up With The Kardashians” star started taking breaks from Lamar’s bedside to attend a few important family events.

As Lamar Odom got stronger, Khloe Kardashian has been staying away longer and longer. She was even spotted courtside for the Houston Rockets season opener against the Denver Nuggets on October 28. That pretty much killed all the stories that Khloe had dumped The Beard so she could work on her marriage to Lamar Odom.

Ever since Khloe Kardashian was spotted in Houston with James Harden, her visits to Lamar Odom’s hospital room have become less frequent. Some have suggested that Odom is heartbroken that Kardashian refuses to leave her baller boyfriend. When Lamar Odom woke up after his overdose and saw Khloe Kardashian by his side, he thought they would work things out.

Now every time Khloe Kardashian is seen in public, people want to know why she’s not at Lamar Odom’s side. Khloe was seen on a recent shopping trip in Los Angeles and even that started up rumors that Lamar had kicked her out.

Lamar may be salty about Kardashian’s rejection and refusal to try and fix their marriage but he is certainly not pushing his wife away. If anything, Lamar Odom is doing quite the opposite. Lamar’s birthday is coming up and he fully intends to spend it with Khloe Kardashian.