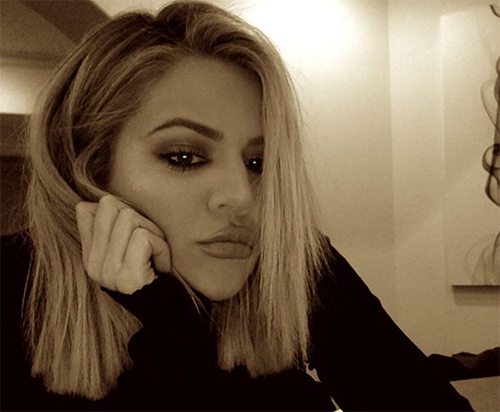 Rob Kardashian, the estranged Kardashian Black Sheep brother, fell ill over the weekend due to undiagnosed diabetes. He was rushed to hospital in a near-comatose state. Initial reports indicate that Rob is in a stable, albeit serious condition. The news sent shockwaves through the Kardashian family, and gave Khloe Kardashian the opportunity to post a sympathy-selfie on Instagram. One person’s ill health is another person’s (Kardashian in this case) Instagram treasure.

The morose image – filtered AF – shows an ingenue-esque Khloe Kardashian, who is obviously saddened by her brother’s illness. The apt caption reads, “Melancholy.” Definition: noun – melancholy
A feeling of pensive sadness, typically with no obvious cause. Like when you drink cold coffee, or when you lose your $10 ice cream at Disneyworld because a teenager in hot pants wanted it more than you did.

Although Rob and the rest of the famdamnily are still feuding over whatever they were feuding over a year ago, Khloe didn’t fall prey to the Kardashian fight of 2014/15. She’s been by her brother’s side all the way, i.e. Jeff Probst during a medical emergency on Survivor.

Mary Lambert’s song, ‘Secrets’, sums it up perfectly: “My family is dysfunctional/But we have a good time killing each other.”