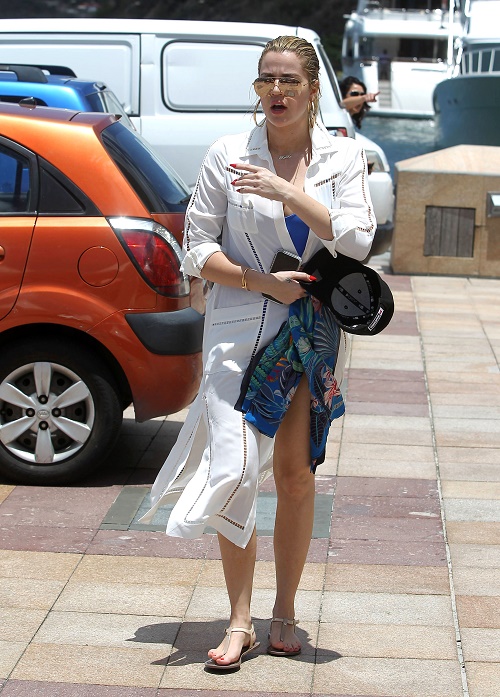 Is Khloe Kardashian pregnant with James Harden’s baby? It’s no secret that Khloe Kardashian has had baby fever for years, and when she and Lamar Odom were still on good terms she was even seeing a fertility doctor to try and help her have a baby. But, what if Khloe wasn’t the problem, and Lamar’s little swimmers weren’t swimming? According to CDL’s insiders, Kim is not the only pregnant Kardashian.

Khloe and Lamar Odom are currently finalizing their lengthy divorce. It’s supposedly really happening this time, after nearly two years. According to a source close to the Kardashian camp, the reason Khloe decided to finally let Lamar go is because she is pregnant with her new boyfriend James Harden’s baby. And Lamar is not taking the news of Khloe’s pregnancy well.

Last week, Lamar rushed Khloe outside of the gym at 6:00 AM, and the KUWTK star freaked out when she realized he had been following her. Khloe and Lamar got into a screaming match before she hopped in her car and drove away. A source close to the family dished to CDL, “Lamar heard that Khloe was pregnant and he lost it. He has always thought that he and Khloe would wind up getting back together. When he heard that she was having a baby with someone else, he knew it was really over, and he became unhinged. That’s why Khloe was so freaked out and left the gym. The old Khloe would have stood there and argued with him, and maybe even gotten physical.”

If Khloe Kardashian is really pregnant, that explains why she is rushing through the divorce process. When her sister Kim was pregnant with Kanye’s baby, and still married to Kris Humphries, Khloe made it pretty clear that she didn’t approve of the whole situation and she was often caught lecturing her sister about how marriages are “supposed to be secret.” Khloe Kardashian would be mortified if the world knew she was pregnant with James’ baby and still married to Lamar.

What do you guys think, is Khloe Kardashian really pregnant this time? Is that why Lamar Odom freaked out on her outside of SoulCycle? Let us know what you think in the comments below!