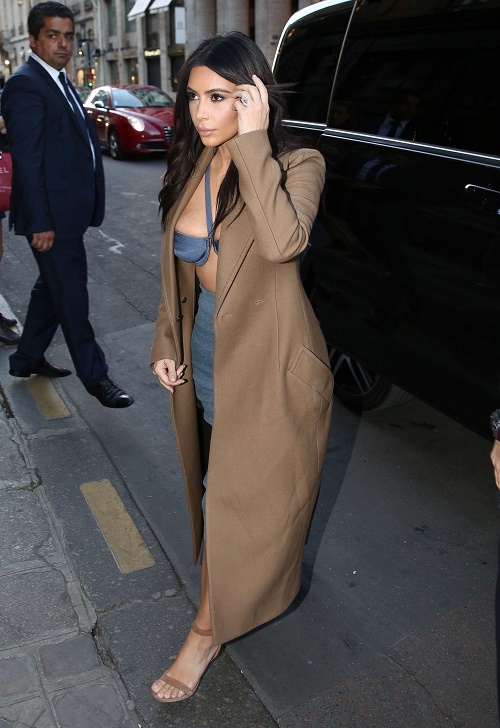 Have you ever wanted to look like Kim Kardashian, or wondered about her workout and diet regimen? Well, thanks to her book, Selfish, which was excerpted in Harper’s Bazaar, we now all about Kim’s daily routine. She gives a very detailed account of her plan. Keep reading if you’re interested in what you can do to have a Kardashian body.

She starts her day waking up at 6:00 a.m. and chats with her husband, Kanye West. She writes, “I’ll say, ‘do you want to go for a run?’ And he usually does.” She goes on to write that she lives in a gated community with various horse trails, which is where she prefers to go for her morning runs. Kim writes that her workouts last an hour or so. “Running takes me about 25 minutes on the trails, and then I’ll come back and work my abs or legs.”

Kim writes that when filming her popular reality show, Keeping Up With the Kardashians, she would begin filming and production at noon. She eats lunch during her breaks for filming because she prefers the chefs cooking, as she finds it healthier. What has she been feasting on most recently? She writes, “Lately, it’s been fish and vegetables or chicken and vegetables. Something like that.”

Kim also mentions her snack habits. She usually breaks for a snack at 3:00 p.m. “If I need a sweet-tooth fix, I’ll have those Justin’s peanut butter packs; the almond butter is also really good. I used to drink a ton of iced tea, but I’ve cut back. I had the craziest addiction to Equal…I’d put 10 Equals in every iced tea.”

Kim Kardashian finishes her day with dinner at 7:00 p.m. The reality star eats the same thing for dinner that she had for lunch; chicken or fish, and vegetables. She also dishes on her favorite treat “…Haagen-Dazs is my biggest indulgence, their Dulce de Leche flavor is my favorite thing in life.”

Kim’s book will be released in May, through Rizzoli Publications, and will chronicle her life through what she knows best: selfies.