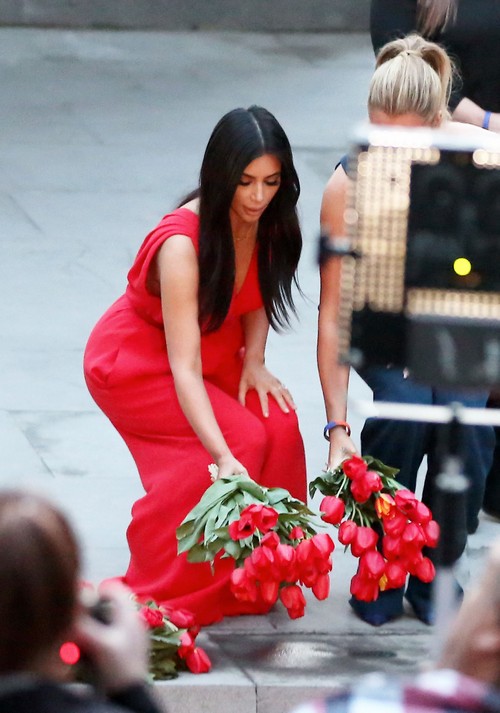 Kim Kardahsian and Khloe Kardashian were recently photographed at a memorial to pay homage to the victims who were killed during the 1915 Armenian Genocide. The sisters went to pay their respects with Kanye West, in Armenia’s capital, Yerevan, on Friday April 10. It’s not their actions or words though, that are upsetting the locals, it’s the way they dressed. Many people are calling Kim and Khloe Kardashian’s outfits too sexy for the solemn occasion. The other attendees were dressed much more modestly, and because of this, people are calling the sisters disrespectful, but this is the Kardashian family we’re speaking of. Check out the new photos below of too sexy Kim and judge for yourself. Note that a genocide memorial is akin to a funeral, a mass funeral.

Khloe sported a monochromatic look, wearing a matching two piece navy blue top and pant set. Of course, she was super glammed up with full make up and a high fashion ponytail. Personally, I think she looked stunning. It wasn’t Khloe’s outfit, however, that really sparked all of the remarks. It was actually her sister Kim’s outfit, that many people are finding offensive. How shocking.

Kim Kardashian wore a bright red jumper, gold choker, flawless make up, and her iconic straight black hair, parted in the middle, not too mention a whole lot of cleavage. In many cultures, wearing red to memorials is considered disrespectful, or inappropriate because it is such a bright, vibrant color. Many people view it as a happy color, or a color you wear when you are celebrating.

The Kardashians are known for their over the top fashion, and when you’re making millions for the way you look, don’t you always have to keep it up? No pun intended. All in all, I really don’t think it’s a big deal. Kim and Khloe Kardashian are known throughout the world, and it is highly unlikely that the sisters showed up to a memorial, intentionally wanting to upset the people and their culture. You have to admit, they do look good.

What do you think though? Should Kim Kardahsian and Khloe Kardashian have known better than to wear something so revealing to such a solemn, serious place? Or are people looking for any excuse to hate on the sisters, and the Kardashian family? Like we need an excuse, Rob Kardashian doesn’t? Let us know in the comments below.

Kim Kardashian, her husband Kanye West, her daughter North West, her sister Khloe Kardashian and cousins Kourtni and Kara visit the ruins of the house of her father Robert Kardashian’s ancestors and visit a church in Gyumri in Armenia on April 11, 2015.