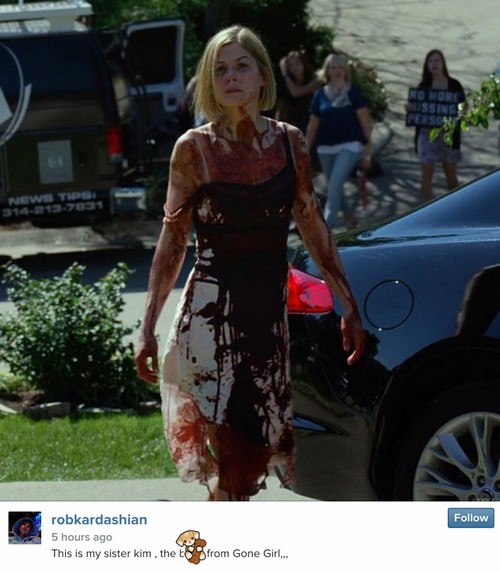 Kim Kardashian and Kanye West were all but divorced a few weeks ago, and then during Paris Fashion Week the rapper and his wife turned up the PDA and apparently shelved their divorce. While general consensus from multiple sources was that Kim was scared to leave Kanye because he was certifiably crazy, Kim’s brother Rob’s latest rant on Instagram says other wise. It turns out that Kim might just be a bit crazier than Kanye, and the reason they didn’t get a divorce is because she is trapping him in their loveless marriage for publicity.

Rob Kardashian and his sister Kim are apparently fighting – so he took to Instagram to slam the KUWTK star and air her dirty laundry to the world. Rob posted a photo from the movie Gone Girl on Instagram, it was a still from one of the final scenes and featured the main character Amy – walking around covered in her boyfriend’s blood after she murdered him. Rob captioned the photo, “This is my sister Kim, the bitch from Gone Girl.”

Now, we’re no fans of Kim Kardashian – but we don’t really get the murderer vibe from her, so the odds of her slicing Kanye’s throat like the girl in Gone Girl did are pretty slim. However, Amy wasn’t just a murderer, she also trapped her husband in a marriage for publicity. Then, she played the victim and had everyone convinced that she was abused and in danger. And, that definitely is right up Kim’s alley.

It’s pretty ironic that Rob Kardashian compared his sister to Gone Girl, the same week that stories hit the Internet claiming Kim was in danger and scared to leave Kanye West because he was so crazy. Rob could be on to something – what if Kim is playing the victim and manipulating everyone in to thinking Kanye is crazy and dangerous, and forcing him to stay married with her for publicity? What do you think – is Kim Kardashian Gone Girl? Is she trapping Kanye in their marriage? Let us know what you think in the comments below!