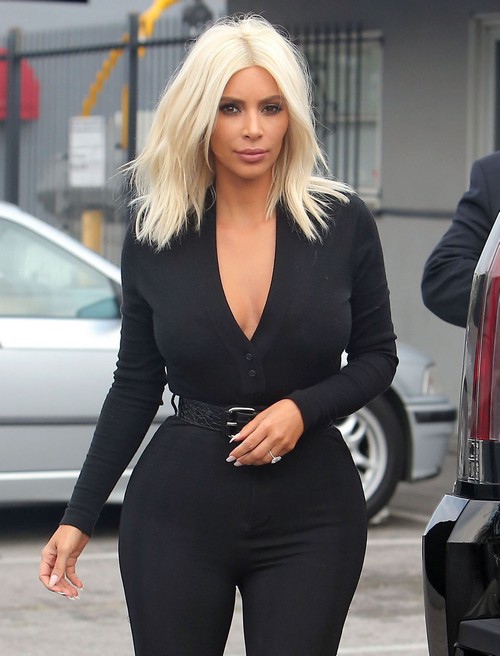 Did Kim Kardashian put her divorce from Kanye West on hold because she wants to try to save her marriage – or because she is scared of her legitimately insane husband? Kanye West has always been crazy, there is no denying that. But, his recent antics have everyone questioning just how mentally unstable the rapper really is. And, Kim Kardashian is reportedly scared to file divorce papers because it will send Kanye over the deep end.

There has not been a dull moment in 2015, thanks to Kanye West. The rapper kicked off the New Year by dissing Beck at the Grammy’s, burying the hatchet with Taylor Swift of all people, publicly slut-shaming his ex Amber Rose, and completely outing Tyga and Kylie Jenner’s illegal affair. To top it off, after dissing Beck, Kanye announced in an interview that the “voices in his head” made him do it. Just when we thought Kanye West couldn’t get any crazier – Paris Fashion Week arrived, and he hit a whole new level of bizarre and unpredictable behavior.

Kim Kardashian debuted platinum blond hair in Paris, making her the laughing stock of the internet and inspiring thousands of memes comparing her to an alien – and rumor has it that Kanye bullied his wife to bleach her naturally dark mane. The Internet soon forgot about Kim’s horrific new hair color though – because Kanye stepped out in high-heeled boots, that looked way too much like the identical ones that Kim was wearing. Wearing women’s shoes was just the tip of the iceberg during Paris Fashion Week though. Kanye, further proving how delusional he is, bragged in an interview that President Obama “calls his house.” Obama quickly shut down Kanye’s claims during his Jimmy Kimmel appearance and revealed that he has only met Kanye twice – and definitely does not have his phone number.

Considering the fact that Kanye has no filter, hears voices in his head, and has imaginary relationships with the President – we’re not exactly shocked that Kim Kardashian is scared to file for divorce. Who knows what he will force her to bleach next – if she tries to leave him? In all seriousness, a source close to the Kardashians shed some light on Kim and Kanye’s divorce. The snitch explained, “Kim will always care about Kanye, and right now he needs helps. She wouldn’t be able to live with herself if something horrible happened to North’s father. Filing the divorce papers is the last thing on Kim’s mind right now, she is just trying to get Kanye’s obvious issues and erratic behavior under control.”

Do you think that Kim Kardashian would be cold-hearted to divorce Kanye right now? Do you think that he is seriously this crazy, or just acting bizarrely to deter Kim from leaving him? Will Kimye be over before the end of 2015? Let us know what you think in the comments below!