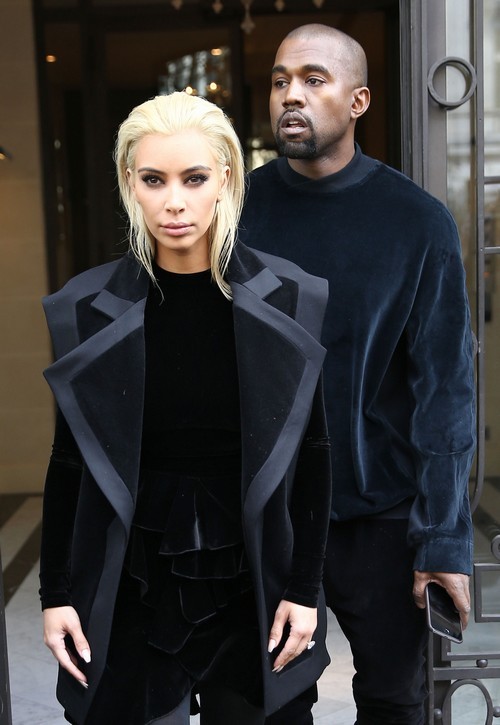 Kim Kardashian needs to divorce Kanye West before he destroys her only asset, her good looks! Kimye now features a platinum blonde alien looking Kim Kardashian in new photos taken in Paris. Kim Kardashian has become Kanye West’s private go-to experiment for his crazy thoughts and impulses. Cut off her hair? Done. Wear ridiculous clothes that he ‘designed’? Done. Dye her hair platinum blonde? Done. Wait, what. Let’s go back to that last one again…

That’s right, Kim Kardashian has dyed her hair platinum blonde, y’all. Not regular blonde, platinum blonde. Kim debuted the new hair color while she left the Royal Monceau hotel during Paris Fashion Week on Thursday. I don’t know if this was Kanye’s and Kim’s attempts to make her look more ‘high-fashion’ as opposed to D-list fake reality star, but it hasn’t worked. Kim just looks completely ridiculous and out-of-place, and the bright and greasy hair color just emphasizes all the wrong features. There are people that can pull off the short, bright blonde hair color, but Kim Kardashian is most definitely not one of them.

Of course, the media and fans’ criticism will eventually reach Kim’s ears, and obviously, we have her husband to thank for this latest change. Kim’s put up with Kanye’s odd requests all this time, but til date, nothing’s made her look quite this bad. I mean, she looks ATROCIOUS. I’m not the only one who sees it right? And it’s Paris Fashion Week, so Kim will probably go around sporting this new look at all the fashion shows.

I also believe that Kim is slowly starting to realize that Kanye’s taste in fashion is almost non-existent, despite his extensive connections in the industry. We know that Kim was already seeing a private divorce attorney in LA, but can you blame her for wanting to run away from him and his crazy ideas? Seriously, who in their right mind would ask Kim to dye her hair platinum blonde?

What do you guys think? Will Kim and Kanye get a divorce over this? Let us know your thoughts in the comments below.