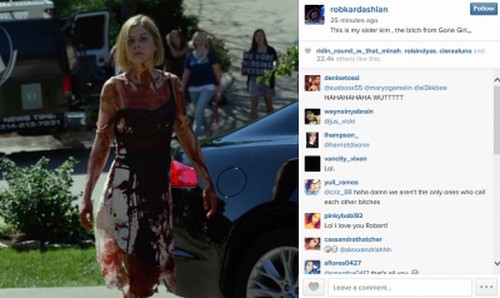 Rob Kardashian hates Kim Kardashian and the siblings are not on great terms right now. Want proof? Look no further than Rob’s Instagram, where he decided to upload a picture of Amy Dunne [from Gone Girl] covered in blood, captioned with, “This is my sister kim, the bitch from Gone Girl….”

Not only that, but Rob actually ended up unfollowing his entire family from Instagram, months after going AWOL. What makes this all the more surprising is that Kim Kardashian literally just spoke out about her brother’s absence from the public eye, talking about how he’s developed ‘social anxiety’. Um, I’m thinking the problem is much, much worse than just ‘social anxiety’…

Now, the last thing we heard about a possible Rob Kardashian/Kim Kardashian feud was back during Kim’s wedding, where Rob ended up bailing. Obviously, the feud has been brewing for some time, especially considering how vitriolic Rob has suddenly gotten.

I mean, unfollowing everyone on Instagram is one thing, but comparing his sister to a crazy psycho murderer? He could be angry that she [and the rest of his family] was continuing to use his issues to gain publicity, but it seems like there’s more going on. The Kardashians might try to sweep Rob’s issues under the rug by attributing them to ‘social anxiety’, but I think it’s clear that he needs help – either with anger management or psychiatric issues.

What do you guys think about Robert Kardashian comparing his sister to a psycho murderer? Do you think he’s just fed up with his family and this is his way of acting out, i.e. starting a public feud on the Internet? Or do you think there is something more serious going on, perhaps something to do with his health and mental state, and perhaps even more than his drug addictions? And if there is, will the Kardashians even acknowledge that?