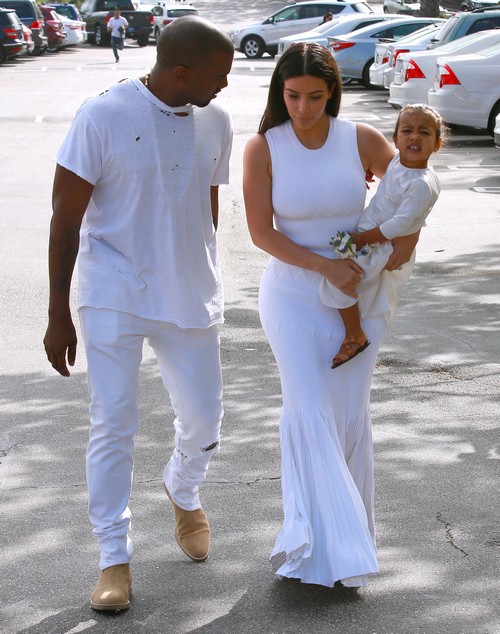 Soon to be divorced Kim Kardashian and Kanye West are keeping up with appearances and stepped out on Easter with their daughter North West and the entire Kardashian clan, including Kris Jenner’s boyfriend Corey Gamble and Kylie’s boyfriend Tyga, on April 5 to attend a Sunday church service in Calabasas, California. Kanye looked miserable as he arrived in his “Sunday Best,” a ripped shirt and jeans. Then again Yeezus probably is not thrilled about his in-laws worshipping another God other than himself.

Kim Kardashian and Kanye West are getting a divorce, despite desperate attempts to keep “Kimye” together for publicity reasons, the couple has finally come to terms with the fact that their marriage/showmance is not working out. Although Kim and Kanye were determined to stick it out together since they have worked so hard to brand themselves together – Kim’s fertility woes and inability to get pregnant with a son for Kanye have taken a toll.

Kim Kardashian has always been open about how badly she wants to get pregnant again – and even confessed that it is because Kanye West wants a son. But, Kim recently revealed on Keeping Up With The Kardashians that when she was pregnant with North West there were complications and her placenta grew in to her uterus. So, if by the miraculous chance she does get pregnant again, it is very dangerous and risky – and when she gives birth there will have to be a surgeon on hand to remove her uterus ASAP.

With all of the health risks involved and the slim chances she can even conceive, Kim has given up hope of getting pregnant. But, her controlling husband Kanye West doesn’t want to hear the reality TV star’s excuses and doesn’t seem to could care less if getting pregnant could risk her health. Kim’s sudden realization that Kanye could care less about her health and just wants another baby was the straw that broke the camel’s back – and insiders are reporting that Kim is going through with the divorce, she already met with high-profile divorce attorneys at the beginning of 2015.

If you were in Kim’s position would you still try to get pregnant? Would you risk your life to save your marriage? Who do you think will get custody of North West when the divorce is final? Let us know what you think in the comments below!

Kim Kardashian departing on a flight at LAX airport in Los Angeles, California with her husband Kanye West and their daughter North West on April 7, 2015. It was recently revealed on ‘Keeping Up With the Kardashians’ that Kim’s health issues might prevent her from carrying children again.

Kim Kardashian and Kanye West take their daughter North to church on Easter Sunday in Calabasas, California on April 5, 2015. Kanye definitely didn’t put on his Sunday best with a torn up shirt and jeans. The rest of the Kardashian family attended, as well as Kris Jenner’s boyfriend, Corey Gamble and Kylie’s boyfriend Tyga. FameFlynet