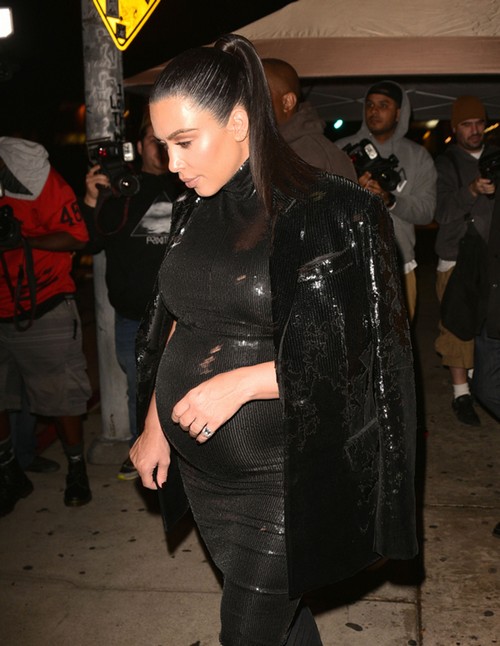 Kim Kardashian and Kanye West divorce rumors are starting to pop up again, and no one is entirely surprised – for two reasons. First and foremost, Kim Kardashian is about to pop out a male heir for rapper Kanye West, and then he really won’t be needing her services any longer.

And, secondly – Kim’s own mother and sisters can’t even stand to be in the same room as her right now, we can only imagine the stresses of being stuck in a relationship with the VERY pregnant and hormonal diva.

Since new first broke of Kimye’s pregnancy, the fact that Kanye is getting the son that he wanted and will no longer need Kim’s baby-making machine has been an underlying theme in tabloid stories for months.

Kanye West has stated on more than one occasion that he just wanted a son to pass his empire on to. Now, he has a daughter and a son … so it stands to reason that Kim Kardashian doesn’t have much leverage left in their “relationship” ( aka business arrangement).

You would think that Kim would be on her best behavior now that she is about to give birth to Kanye’s son in a little less than two months, but its actually quite the opposite. An insider close to Kim dished to CDL that she is just as hormonal as she was when she was pregnant with North, but it is even worse because she just turned 35 years old last month and has slumped in to a midlife crisis depression.

The source explained, “Kim is like a mad woman when she is pregnant, and she lashes out at everyone. To top it off, her self-esteem is at an all time low because she just turned 35. After she was photographed wearing rubber sandals, she was a mess for nearly two days over it. Even her paid staff aren’t getting paid enough to be around her, Kanye is at his breaking point. It will be a miracle if he manages to not dump her before his son is born.”

Now that Kim’s pregnancy is winding down, what do you think will happen with Kim Kardashian and Kanye West after the baby is born? Will Kimye stay together for the kids, or finally throw in the towel and get a divorce? Can their marriage be saved? Share your thoughts in the comments below!