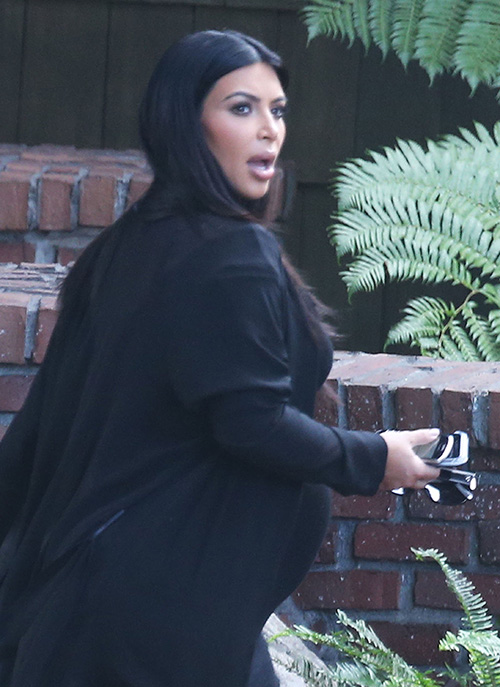 Kris Jenner is working hard to stop Kim Kardashian and Kanye West’s divorce, but her little Kimye intervention doesn’t seem to be making any progress. As a matter of fact, Kim and her husband, Kanye, are fighting now more than ever. Kim’s pregnancy fashion has made her the mockery of the internet, and seeing as how her rapper-turned-fashion designer hubby is the one who is dressing her, she blames him for the hideous pictures that keep popping up in the media of her dressed I bizarre outfits.

If Kanye West has any interest in saving his marriage and stopping their impending divorce, he might want to stop sending his hormonal and bloated wife out in dresses that make her look like a hot, pregnant mess. Kim Kardashian has been roasted on the internet over the past few weeks, because of the ridiculous ensembles she has been wearing out and about.

Remember that skin tight black dress that laced up the front like a pair of sneakers that Kim was rocking in New York City last week? According to Closer Magazine, Kanye West picked the dress out for her and reassured her that she looked amazing. But, when she saw the pictures of herself smeared all over the internet wearing the dress, and the cruel comments and jokes that followed – Kim was mortified.

Closer Magazine’s inside source dished, “She turned to Kanye for style advice and he suggested she sex it up in the low-cut black dress. She trusted him but was horrified when she saw the photos, bursting into tears and lashing out at Kanye.”

Kim Kardashian is a hormonal pregnant mess, and it just seems cruel to keep sending her out in public wearing lace and latex, or half-naked. But, at the same time, why on earth does she listen to Kanye? You would think that by now she might consider hiring a real fashion consultant to dress her – at least while she is pregnant.

Do you think that Kim and Kanye will be able to save their marriage? Or is the fact that they are actually fighting over these hideous dresses a sure sign that a divorce is unavoidable? Let us know what you think in the comments below!