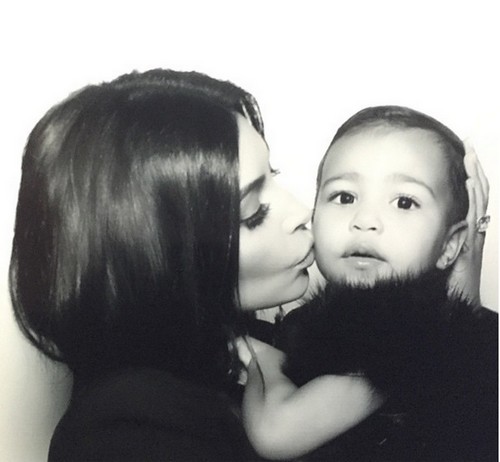 Kim Kardashian and Kanye West are up to something and it smells like divorce! Kim Kardashian taking to Twitter to slam rumors about her troubled marriage has about equal legitimacy to Tiger Woods’ claims he didn’t cheat on wife Elin Nordegren. In other words, sorry Kim, but we’re not buying what you’re selling – if we choose ‘fact’ or ‘fantasy’ as an apt descriptor of your Twitter message we are forced to side with ‘fantasy.’ Kim Kardashian may be used to making pitches on Twitter as a spokesperson for several companies, but her New Year’s Eve Twitter rant where she pitches a happy marriage is even less believable! We do believe that Kim isn’t pregnant since we are well aware of her fertility problems – so that aspect of her New Year’s Eve Twitter message is true.

First of all, we KNOW there is trouble in paradise when Kim Kardashian chooses to stay in on New Year’s Eve. Claiming to be cooking and watching movies with her hubby Kanye West and daughter North West rather than opting for her typical big payday club appearance on New Year’s Eve is just not in true Kim Kardashian form. In fact, she and hubby Kanye were said to be planning on attending Diddy’s big blowout NYE party.

Something is very off. Even more strange is that Kanye West debuted a new song in which he collaborated with Paul McCartney, “Only One.” The song dropped on New Year’s Eve, yet Kanye stayed in to watch movies with Kim? Sounds highly suspicious for a huge debut single for the rapper.

And for those of you assuming the song, “Only One” is about his wife, you are wrong. The special ode to a very special one person is about… Kanye! He reportedly wrote the song from the perspective of his mother, the late Donda West who died after complications from cosmetic surgery. The song also honors daughter North. Lyrics from the song include “Hello my only one / Just like the morning sun / You’ll keep on rising till the sky knows your name / And you’re still my chosen one / Remember who you are / No, You’re not perfect but you’re not your mistakes” and “Tell Nori about me / Tell Nori about me / I just want you to do me a favor / Tell Nori about me.”

Kim said on Twitter that the song always makes her cry. Perhaps that’s because it is not about her! Kim went on to tweet about rumors that her marriage is in trouble, “Kanye and I are not having marriage problems. Were [sic] literally obsessed with each other!” Clever Kim…she found a way to seem as though she’s refuting divorce chatter, but she’s doing nothing more than claiming the two are obsessed with one another. Being obsessed with someone doesn’t necessarily equal love or forever, for that matter. I am obsessed with Judge Judy and rice pudding, but that doesn’t mean I’m intimate with either or planning a family with them. Stalkers are “obsessed” so that’s just creepy. She could have chosen thousands of different ways to proclaim her love, if she were in fact “in love” with Kanye.

So…go ahead, Kim. Tell us more about your bum being real, Kylie’s inflated lips being the result of lip liner, and how wonderful your marriage is. I’m sure it all sounds quite wonderful to you after saying it many times. Who knows..you may even begin to believe yourself!