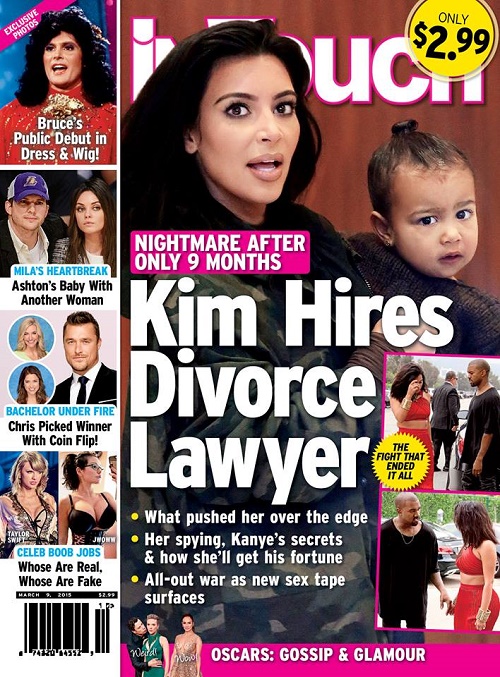 Kim Kardashian and Kanye West are getting a divorce – as if CDL hasn’t been reporting that for weeks. The March 9th cover of In Touch Magazine is plastered with a photo of a miserable Kim Kardashian toting North West on her hip, who by the way has the best “F—k You” face we have ever seen on a baby, there is no doubt in our minds that she has some Kanye DNA in her. This week’s In Touch cover screams, “Kim Hires Divorce Lawyer.”

It’s no secret that Kim Kardashian and Kanye West’s marriage has been on the rocks for months. We have covered the couple’s fights and tribulations since they began. Considering the Keeping Up With The Kardashian star’s track record and Kanye’s ego – we all knew it was only a matter of time before they divorced. The cover of In Touch Magazine teases, “What pushed Kim over the edge. Her spying, Kanye’s secrets, and how she will get his fortune. All-out war as new sex-tape surfaces.” The magazine also shows a few photos of Kanye and Kim in what appears to be a heated argument and captioned the photos, “The fight that ended it all.”

In other gossip news, The March 9th cover of In Touch Magazine also teases exclusive photos of Kim Kardashian’s step-father, Bruce Jenner, in a wig and dress – Belinda is in the building! We are actually pretty intrigued to see Bruce in this way, not that we haven’t already seen him with make-up on, and long hair, and boobs. In Touch also exposes The Bachelor Chris Soules’s untraditional Final Rose Ceremony. Apparently, Chris was so torn between Becca Tilley and Whitney Bischoff that he decided which woman he would marry by flipping a coin. Way to make a girl feel special! And in other celebrity news, Ashton Kutcher has a love child – and Mila Kunis is devastated. She doesn’t want baby Wyatt to have any half-siblings.

So what do you think of Kim Kardashian & Kanye West divorce? Who is the new sex-tape of, Kim or Kanye? Do you believe Chris Soules really chose the winner of The Bachelor by flipping a coin? And what do you think of Bruce/Belinda’s new look? Let us know in the comments below!