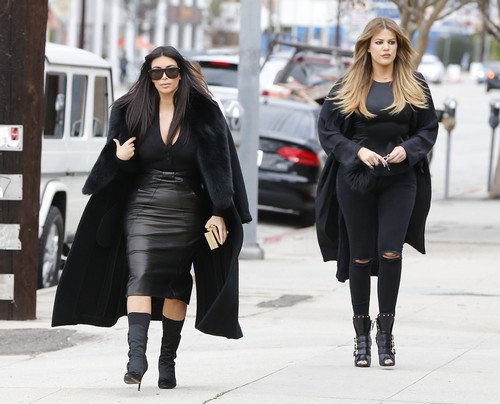 Kim Kardashian is embracing her divorce plans and getting ready to get back to the single life without deadweight Kanye West. With Kanye West nowhere in sight, and baby North West left with nannies as usual, Kim Kardashian has been out and about as a single woman quite a bit lately—hanging with girlfriends and Khloe Kardashian (see photos below) and partying late into the night… she is totally ready to divorce her hubby and gain back the attention she lost once she married.

Kim Kardashian is not only over Kanye West and ready to divorce him, she is ready to gain back her spot as the most popular of the Kardashian-Jenner clan after having lost the title to half-sister Kendall Jenner. Kim was upset after mom and manager Kris Jenner shared that her focus for the upcoming year is to work with Kendall, getting her a lot of modeling gigs, and helping her break into acting. Kim sees her sisters as becoming more and more popular, and getting more and more attention and she is most upset because she feels she lost her status when she married Kanye and had daughter North. Kim’s sister Kourtney Kardashian is the only one of the clan besides Kim to have children. Kourtney, however, typically only goes out for paid appearances, promotional events for the family’s shows, or events that are kid-friendly. Kim, on the other hand, struggles with being a mom now because she feels she lost her sexy vibe.

Being married to Kanye West only makes things worse. Now that she is a married mom, she feels the public no longer thinks of her as being young and sexy like younger sister Kendall. Kim misses the single life and is growing more and more tired of being a wife and mother. She loves North to death, but feels like she is still not truly committed to being a mother. The bond just isn’t there. She thinks of North as an obligation—just as her mom did with her. Kris and Kim never had a strong mother-daughter bond.

Now, Kim Kardashian is trying to get a feel for what her new life will be like after the divorce from Kanye. She has been out with her sisters and girlfriends to a Sam Smith concert, and was spotted having dinner on January 28th with brother-in-lay Scott Disick. Kim posted pics to Instagram of just herself and North West hanging out together… Kanye has been nowhere in sight in any of the recent pics. Kim started actually considering letting North live in France with Kanye when they divorce. She wants to be able to share custody and have North for months as a time, but she is aching for her freedom back. Kim loves the attention from her T-Mobile Super Bowl ad, and wants to be thought of as sexy, single and free again. Kim been getting a good taste of the single life lately…and she’s awfully happy with it!