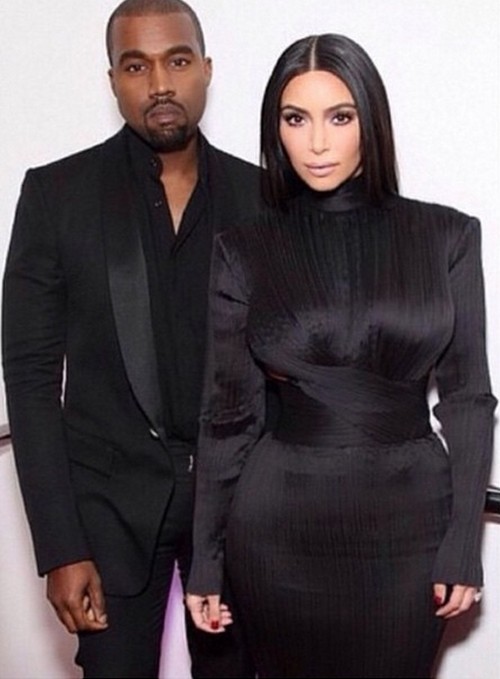 Kim Kardashian’s divorce filing from Kanye West has been put on hold by Kris Jenner after the BET Awards. Kim Kardashian happily jumped at the opportunity to attend the BET Awards with hubby Kanye West because she knew the spotlight would be on the two of them, both clad in matching (of course) all black Balmain couture. As CDL told you, Kim Kardashian has been getting all her ducks in a row, carefully planning and plotting, making connections, and building her contacts before she and Kanye West divorce.

Friends of Kim say she is an opportunist and will only attend events that will mean good publicity for her. She was sure to attend the BET Awards in Los Angeles for that very reason. Kim knew she and Kanye would be the center of attention, and she hoped to make connections with industry people that are close to Kanye. Kanye has opened many doors for Kim that would have otherwise surely been closed…perhaps even locked! Kim has been aching to divorce Kanye for months, but after talking things over with momager Kris Jenner, they’ve determined it is better for her career to stay with Kanye for the time being, with Kim asking her hubby to start new projects for her based on his connections. Paper Magazine was a Kanye connection. Vogue…another Kanye connection. Kim Kardashian’s upcoming nude shoot, in which she had to include Kanye, was only obtained through Kanye.

Kanye hooked Kim up with the right people and gave her the idea for her Selfie book. Kim may not be in love with Kanye, but she is in love with what he’s done for her career, so she is tolerating him. She has been carefully planning the inevitable divorce for some time, but after mom Kris Jenner told her it was too soon after her marriage to even consider divorce, Kim realized she’d have to stick it out.

Ever the opportunist, she decided to use her time wisely and take advantage of the situation. Kim was all over the place at the awards, mingling and talking about her new book, Selfie. For those still skeptical about Kim’s love for Kanye… check out the posed pictures of the couple kissing. It looks like she’s kissing her manager, or publicist. She perches her lips out to his just as the camera gets the shot. Then, the two can always be seen walking apart from one another—typically Kim a few feet ahead of a miserable looking Kanye.

Despite Kim’s “confession” of not smiling because it causes wrinkles, take some time to look at pictures of her with ex Reggie Bush…guess she wasn’t too worried about laugh lines or wrinkles when she was with him. Or, perhaps, she was just happy. Sorry, Kim. Can’t fool us and we know exactly why you were at the BET Awards—not to support Kanye, but to build you’re A-List contacts before you divorce Kanye and move on to the next sucker.

Kanye West was presented with the Visionary Award at the BET Awards. You’d think someone who is a visionary would be able to see Kim Kardashian is using him for all she can!