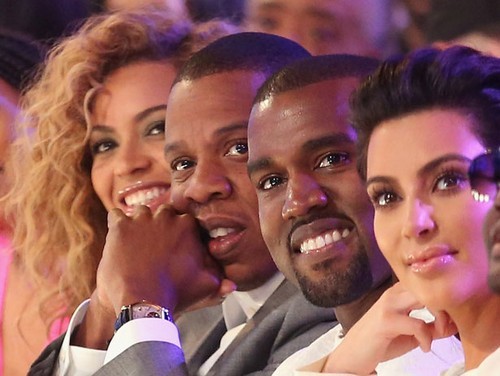 Kim Kardashian is using Kanye West for all he’s worth prior to filing for divorce, including helping to boost her brand by getting closer to Beyonce  and Jay-Z. Despite the wedding snub by Jay-Z and Beyonce, Kanye West was forced to let go of any animosity with the power couple after wife Kim Kardashian relentlessly begged him to set up a double-date in an effort to raise her status by hanging with the A-Listers. Kim Kardashian got her wish last night after she and hubby Kanye West were spotted meeting up with Beyonce and Jay-Z on Friday January 16 at a club in Los Angeles.

While the foursome were not pictured together (Beyonce insisted on that?), arriving and leaving separately, Kim Kardashian and Kanye West were pictured arriving at the club and the distance between the two couldn’t be greater. The looks on their faces literally screamed divorce as Kanye looked completely miserable in his usual desert boots and jean attire, in his usual spot—walking a couple steps behind wife Kim Kardashian. There was no hand-holding as their divorce approaches, nor were they even walking beside one another—they could have been complete strangers based on their non-interaction.  Kim couldn’t wait to join power couple Jay-Z and Beyonce on a double-date and she knew there would be no chance of the meeting without her husband as Kanye and Jay-Z still claim to be friends even after Jay-Z and Beyonce’s wedding snub—opting to be in the Hamptons during the time of Kim and Kanye’s wedding.

Kim knows a divorce with Kanye is imminent, and as rumors swirl that Beyonce and Jay-Z are also on the verge of divorce, Kim knew she needed to act quickly, pressuring Kanye to set up a double-date so she has a shot at hobnobbing with Beyonce as it may be her last chance before the foursome each become single.

Kim is maximizing on every opportunity to be out and seen publicly with as many A-Listers as possible before she and Kanye divorce. Kanye has major connections that she would otherwise not have access to (Vogue anyone?). Kim is already plotting with manager mom Kris Jenner on who she needs to get in with and be seen with before the couple’s split.  Kris Jenner, momager from hell, has already advised Kim that she’ll likely have an epic divorce, with Kanye and his network shunning her—forcing her back to the D-List status on a permanent basis. Kris is pushing Kim to act quickly and make good connections before the divorce. Kim is trying her best to befriend Beyonce—hoping the two will soon be single so they can grow a friendship based on their similar situations. It is doubtful Beyonce will bite as Kim Kardashian has never been one of her favorite people—and she certainly hasn’t done anything to make Beyonce change her mind.

CDLers, do you think Kim Kardashian can garner enough status from Kanye West’s A-List friends to earn her a spot on the high end of the celeb totem pole? What do you think of the double-date with Jay-Z and Beyonce?