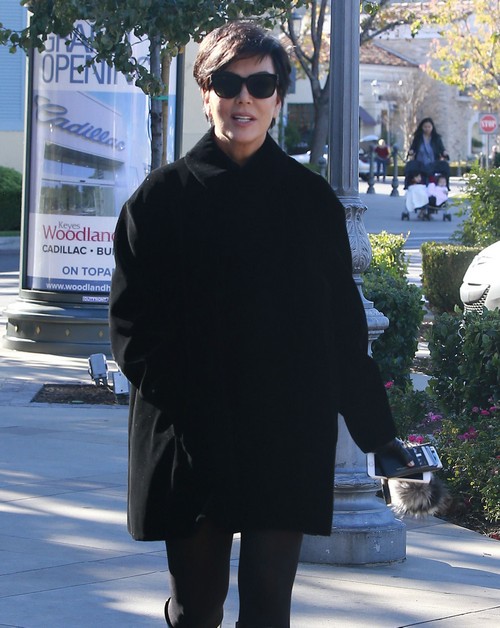 Keeping Up With The Kardashian star Kris Jenner is a real piece of work. No really, the Kardashian matriarch has had more plastic surgery and cosmetic work done than all of her daughters combined – in a desperate attempt to turn back the hands of time. Kris Jenner has always been obsessed with keeping up with her Kardashian daughters, despite the fact that in 2015 the wretched momager will be turning a whopping 60 years old. And – brace yourselves, Kris Jenner plans to celebrate her milestone 60th birthday with a nude photo spread in Playboy magazine.

The January 26th edition of GLOBE Magazine reveals, “Kris Jenner plans to celebrate turning 60 later this year … by posing naked for Playboy! The Kardashian momager has decided to strip off, just like her daughters Kim and Kourtney, who have left nothing to the imagination in some of their photo shoots.” A Hollywood insider snitched to GLOBE Magazine, “This is going to be Kris’s little birthday present to herself. And while the pictures will be very tasteful, she does intend to bare all – and she means all.”

Kim Kardashian’s shocking nude photos in Paper Magazine were supposed to “break the internet,” but we have a sneaking suspicion Kris’s Playboy spread could render the internet irreparable. Ironically Playboy Magazine has not confirmed nor denied the rumors that they will be featuring nude photos of the 60 year old reality TV star on any of their covers in 2015. Frankly, we wouldn’t be surprised if Kris Jenner is actually paying them for a coveted spot in their x-rated magazine – because sales will be dismal…to say the least.

It has been a reoccurring storyline over the years on Keeping Up With The Kardashians – that Kris’s daughters are embarrassed by the fact that she acts 16 and is going on 60. The momager has a disturbing obsession with her daughters and continues to try and one up them, in Kris’s twisted mind she probably believes that she will top her daughter Kim Kardashian’s Paper Magazine shoot. What do you think of Kris Jenner posing for Playboy? Will she have to pay the magazine to publish nude photos of her 60 year old body? Let us know what you think in the comments below!