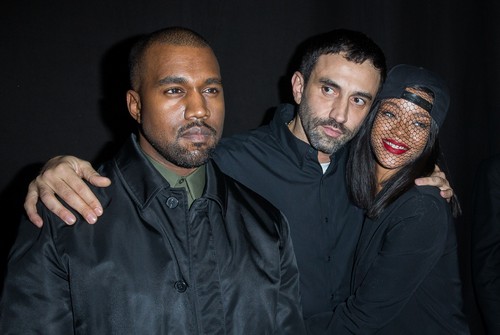 Kim Kardashian wants to divorce Kanye West on her terms, not on his. Kim is upset because since Kanye began getting closer to Rihanna he is less averse to the coming split.  Kanye West was more than happy to share a song he collaborated with Rihanna on at the iHeartMedia Music Summit just a few weeks after she spills that he will embark on 2015 tour with a special meet-and-greet opportunity in honor of her foundation, and Kim Kardashian is starting to feel quite jealous over the close relationship between the two artists.

Kim Kardashian might not consider Kanye West her “ideal” man, but for now he is still “her man” and she certainly isn’t about to let someone steal him away. Kim may want to divorce Kanye, but she wants the divorce to be on her terms, not because she was dumped. A few weeks ago her antennae was already up after Rihanna proudly blabbed that Kanye West was planning a 2015 tour with proceeds from a special meet-and-greet from the tour going to the Clara Lionel Foundation.

In fact, she is planning a 2015 tour as well, and has a similar meet-and-greet package. Details about tour stops and dates for both have not yet been released, but we wouldn’t be surprised if these two cross paths a lot this year. The fact that both planned tours for the year ahead, both are raising money for the Clara Lionel Foundation, and are collaborating on at least one song on his album is quite telling, and Kim Kardashian is really watching the two even more closely now, despite wanting a divorce from Kanye.

So does Kim have a reason to be jealous of the time Rihanna is spending with her man? Well, yes! Kim has actually been jealous of Rihanna for years. Rihanna has a natural beauty to her. She’s never had any work done, has a banging body, is incredibly talented, and understands what it’s like to throw yourself into your craft. Considering Kim doesn’t have a craft…or a talent (standing up, anyway) she becomes infuriated when Kanye tells her that she just “doesn’t get it and won’t ever understand” why he throws himself into his work. Kanye feels like everything that Kim’s done lately has been a result of his planning and opportunities that she wouldn’t have had otherwise. He’s always loved that Rihanna is a shining star all on her own. Kanye feels like Rihanna “gets him” and loves how passionate she is for the men in her life. He also loves the fact that she is really freaky and up for anything. Rihanna has a “down for whatever” attitude that drives Kanye crazy. Kanye loves the fact that Rihanna puts all her energy into her work and her man and is growing tired of Kim’s obsession with herself and the fact that she puts her family before him. Rihanna loves her family, but she owns her decisions and is far more independent.

Kanye has been hoping for the chance to get closer with his dream girl Rihanna for a long time despite Kim’s jealousy over it. But does the mutual respect they have for one another mean Kanye is cheating on Kim? Not necessarily..yet. But if these two spend any time touring together in 2015, there will likely be some sparks. Rihanna knows that Kim is jealous of her by how she acts around her. Kanye told Rihanna that Kim is bothered when he talks about working with her. Rihanna doesn’t care one bit if she makes Kim jealous or uncomfortable. She actually thinks it is funny because she isn’t planning a relationship with Kanye. That’s doesn’t mean she is open to having some fun with him. Kanye was beaming when talking about their collaboration at the iHeartMedia Music Summit, and with years of rumors of a relationship between Kanye West and Rihanna, Kim is seething with jealousy.

Kim Kardashian is the master manipulator and is working hard to make everyone believe she is fine with the close relationship between Kanye West and Rihanna, but deep down, she is not happy about their closeness and the bond they share. Their hot passionate temperament and openness to a little freaky behavior makes a Kanye-Rihanna relationship seem like a strong possibility. We’ll keep you posted on upcoming tour dates. For now, tell us what you think about a Rihanna-Kanye hook-up CDLers!

Kim Kardashian and her husband Kanye West arrive on flight into Dulles Airport in Washington D.C. on January 24, 2015. FameFlynet