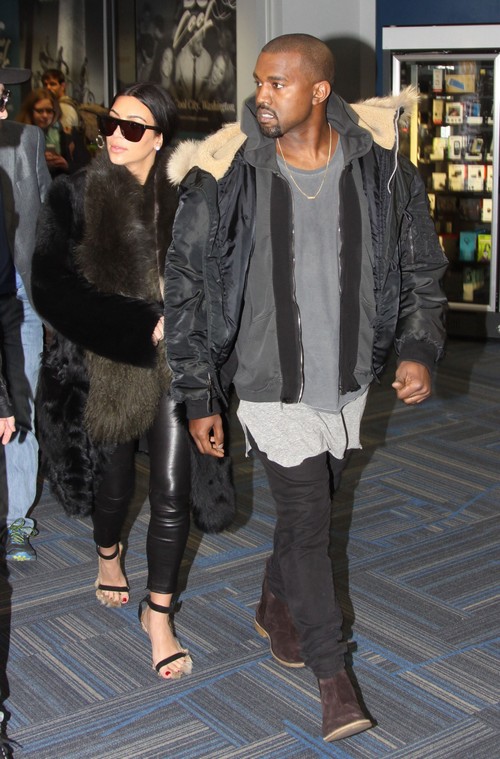 Before Kim Kardashian files for divorce she has convinced Kanye West to do a joint nude photo shoot to appear as a spread in a major magazine. Kim Kardashian wants another nude photo shoot, but as the public is becoming bored seeing her naked, she needs hubby Kanye West’s connections for a deal with a reputable magazine, and has talked Kanye into doing the spread with her!

Listen closely…do you hear that? That was the sound of Kanye West’s last shred of street credibility going down the toilet as he plans to do a nude photo shoot spread with wife Kim Kardashian as she poses full nude. Kim, of course, loved the attention from her Paper Magazine nude cover and wants more, more, more, reports Radar Online. She has become quite comfortable getting naked for the camera and is feeling quite confident that the public wants to see her photoshopped bod in all its fat-injected glory once again.

Kim was advised that because she only recently did the Paper Magazine spread, there wouldn’t be interest in another naked photo shoot. And Kanye’s connections wouldn’t help either, this time. The bottom line for Kim was that she’d need to come with something different, and that was when she decided to invite Kanye to do the spread with her under the guise that it will be an artistic, tasteful piece that they can preserve forever. Kanye fell for Kim’s idea and agreed to do the shoot with her, not realized he was being used.

Kim won’t even share a selfie with daughter North—having cropped her daughter’s face out of a picture so the focus was on her—so certainly wouldn’t pan to share this all important photo shoot with Kanye unless she absolutely had to. Given that she is counting the days until she can divorce the hot-headed rapper, and the fact that she does not consider him sexy, she wasn’t happy about having to include him in her shoot. Kim thought being full nude would be enough to make several magazines bite, but after receiving yawn after yawn, she got desperate and had the idea to ask Kanye to join her.

For someone who claims to be so smart, how did Kanye West not see wife Kim Kardashian’s motives? This is going to make the divorce get that much uglier!