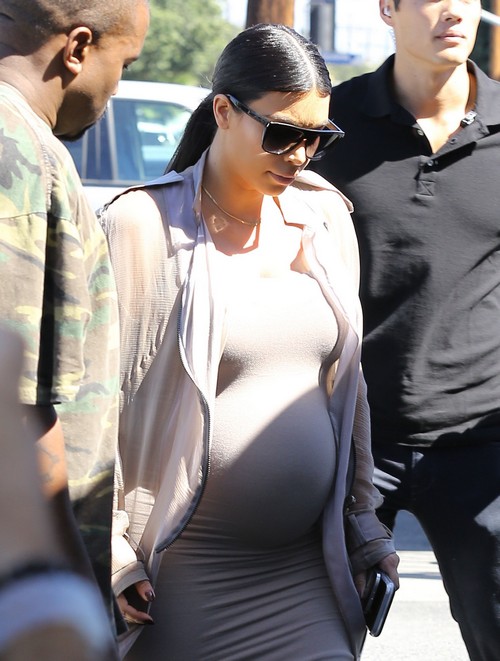 Kim Kardashian’s due date is right around the corner on Christmas Day, 2105. It seems like not that long ago that Kim and her husband Kanye West confirmed baby number two was on the way and North West was going to be a big sister, but the Keeping Up With The Kardashians star’ baby bump seems to be growing rapidly – and according to a new report her due date is on Christmas!

Since Kim Kardashian announced she was pregnant, she has been mum on the baby’s actual due date. But, her close pals snitched and revealed that the baby is set to be born on December 25, 2015.

TMZ reveals, “Sources close to the couple tell TMZ, doctors have back timed the date of conception and they’ve been told their son will be born on Xmas day. Obviously, the due date is always a little up in the air, but Xmas is the likely date, and here’s why. We’re told Kim has a condition where the placenta grows too deeply into the uterus, which could be dangerous.” The report goes on to say that Kimye has already booked the best birthing suite that money can buy at Cedars-Sinai Hospital for Christmas.

Once we get over the fact that Kanye thinks he is Jesus and his son is being born on Jesus’s birthday – we can’t help but worry about the poor kid’s name. Being born on Christmas Day just opens up a whole new world of ridiculous baby names for Kim and Kanye. North Pole? St. Nicholas? Santa? Then there is always Jesus. Seriously, learning what ridiculous name Kim and Kanye give to their new baby boy really will be like a Christmas present for us.

Do you think that Kim Kardashian will actually give birth on Christmas Day? What will Kimye name their baby boy? Will it be a Christmas themed name? Let us know what you think in the comments below!

Update: Kim Kardashian told Ellen DeGeneres she wants to name her son Easton West! Is this even legal? Kim said in a segment that will air September 30: “I do like the name Easton. Easton West, I don’t think my husband likes that name, but I do like it. I don’t think we’ll go another direction. It’s definitely not South, every time someone says South, I just want to roll my eyes – I do like Easton, but I don’t think Kanye likes Easton, I’m not sure.”