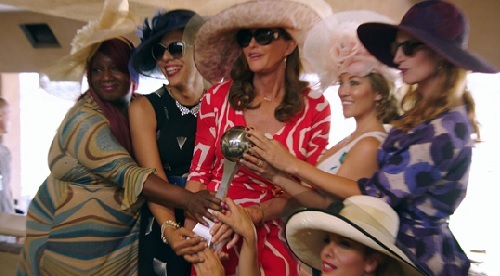 Kim Kardashian is totally trying to ride Caitlyn Jenner’s coattails and using her transformation to remain relevant. Caitlyn Jenner, formerly known as Bruce Jenner, created a media frenzy when she debuted as a woman for the first time on the cover of Vanity Fair Magazine – she even overshadowed Kim Kardashian’s pregnancy announcement. On Sunday, July 26, Caitlyn’s new reality TV show, “I Am Cait,” premiered on E! – and of course Kim Kardashian made sure she was front and center when the camera crew arrived.

In the season premiere of “I Am Cait,” fans got to see Kim Kardashian rush over to Cait’s Malibu residence to see her new look after her transformation. On the reality show, Kim raved about how pretty Caitlyn looked and said that she could pass as Kendall Jenner’s mother. Kim even went through Caitlyn’s closet with her to check out her new dressed, she appeared to be the picture of support. But Caitlyn made it very clear in the premiere that the Kardashians were not half as supportive as they pretended to be.

When Caitlyn Jenner “came out” and made her big debut, Kim and her siblings hit social media to support her – but on “I Am Cait” she revealed that Kim and her brother and sisters wouldn’t even see her. Talk about fakery! Caitlyn complained to Pam during the premiere that she had invited Kylie, Rob, Kim, Kourtney, and Khloe over multiple times during her transition and they never showed up. But Kim made sure that she was front and center when the E! camera crew arrived to film scenes for “I Am Cait.”

Kim Kardashian has no shame: she knows the fame game. If you aren’t hot at the moment, then you have to attach yourself to someone who is – and that’s Caitlyn Jenner. Kim is totally exploiting Cait and riding her coattails, and sadly Cait is so desperate for her family’s approval that she is lapping up every minute of Kim’s fake support. Did you watch the “I Am Cait” premiere? Did you think Kim was just putting on a show for the cameras, or was she genuinely supportive of Caitlyn? Let us know what you think in the comments below!