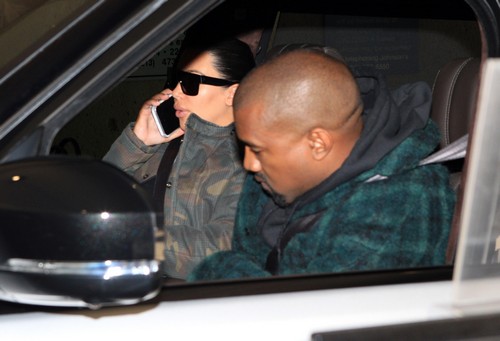 Kim Kardashian and Kanye West are having some major marriage problems and if Kanye doesn’t do something quick, the “Keeping Up With The Kardashians” star has hinted at divorcing the selfish rapper.

It’s no secret that Kim isn’t the easiest person to deal with and it gets even more difficult when the reality star is pregnant. That doesn’t excuse Kanye from practically abandoning his reality star wife during the most critical part of a high risk pregnancy.

Kanye West is making appearances at all the appropriate times but things are definitely icy between the “Gold Digger” rapper and his pregnant wife. In Touch magazine reported that Kim and Kanye were fighting pretty badly during Kris Jenner’s Great Gatsby-inspired 60th birthday party. The source claims that Kanye spent most of the party trying to avoid Kim while he talked to other guests and took plenty of pictures.

Kim Kardashian is also angry at the “Heartless” rapper for dragging her through nightmare renovations on their Hidden Hills home again. Kim is about ready to pop and she’s stuck back at Kris Jenner’s house while upgrades are done to the master bedroom and a new nursery that is planned to go next to it. The “Keeping Up With The Kardashians” star is fuming that she isn’t able to enjoy the end of her pregnancy in her own home.

To make matters worse, Kanye is reportedly too busy out partying to even come home to his pregnant wife. The report blasted the “Through The Wire” rapper for making Kim sleep alone at her mom’s house most nights while he is either out living it up or spending insane hours in the studio trying to put another album together.

Kim Kardashian is really upset with Kanye West right now and she’s dropped a few clues lately to prove it. For starters, Kim recently published on her own website about her high risk pregnancy. She talked about having two very scary medical conditions and how concerned that her doctor and her mother, Kris Jenner, were about her health. Kim never mentioned Kanye at all and that isn’t like her to just brush Kanye off like that.

Then in an interview with Ryan Seacrest, Kim talked about how needy Kanye is and how much time and effort he requires. West was livid after the interview and claimed Kardashian talked about him like he was one of the children.

Kanye feels like Kim has been incredibly disrespectful while Kim feels like she should be pampered and babied through her pregnancy. That’s why Kim hinted so hard on social media about wanting a $1 million push present.

Kim and Kanye are barely even talking and if she asked in person for such a lavish gift, West would either ignore her or laugh in her fast. So instead, Kim put the ultimate pressure on Kanye to get her the gift that she wants by telling the world about it.

Kim was pretty impossible to deal with when she was pregnant with North West but this second pregnancy has been even worse. Kardashian has been acting like a hormonal monster and Kanye has been trying to keep busy in order to avoid fighting with his pregnant wife.

Kimye’s whole relationship is a mess right now and some are betting that Kanye West and Kim Kardashian may be headed to divorce court soon after baby boy West gets here.