Kim Kardashian Prepares For Breech Birth: Does Everything In Her Power To Turn Baby Around! 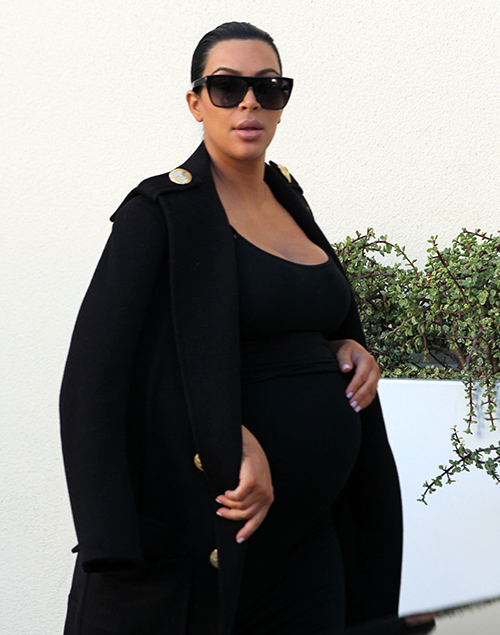 Kim Kardashian is near the end of her pregnancy and anxiously awaiting the arrival of her bouncing baby boy. People reported Kim was feeling stressed with the knowledge that her baby is breech and is not showing any signs that he plans on turning to the head-down position. Kim noted on her blog that she was starting to feel anxious that she will need a C-section for her second child’s birth.

In her blog, she admitted she was anxious about her delivery and felt like the cards are stacked up against her to have the birth she wanted. She noted that the breech position was troublesome for her because she read babies SHOULD flip to the head-down position by 32 weeks.

Kim noted that most babies were born C-section when in breech position, but she decided to explore other options for her birth. “As I lay awake at night, researching, I’ve learned you actually can deliver a breech baby, and I feel fortunate that my doctor Paul Crane is one of the few doctors who can still do this. They just don’t teach this style anymore,” Kim wrote in her blog early Tuesday morning.

Kim mentioned that she had been watching documentaries about breeched births, one of which was titled, “Head’s up.” “I found it very interesting that I now have the option to deliver a breech baby, as opposed to jumping into a C-section. Obviously, if it is an emergency and for the safety of my son, I will agree to surgery, but if I don’t need one, I’d rather not,” Kim explained.

Kim noted that four percent of babies are breech at 36 weeks. “It’s been hard because I usually go to my mom or Kourtney for baby and pregnancy advice, but they both- nine pregnancies between them- have never experienced a breech baby,” Kim stated.

Kim has been trying everything she can to encourage her little one to turn a head down. “I lay practically upside down three times a day for 15 minutes at a time. I play music in the right position and ice my belly in certain spots to get him to squirm out of the breech position. I even started acupuncture where I burn Moxa on my pinky toe every day. I am even attempting hypnosis,” Kim Kardashian detailed.

Kim noted that it was possible that her baby boy may be too large to turn at this point. By ultrasound, the doctor thinks he could be over seven pounds right now. She added that she would be trying a Version [also known as an external inversion], a procedure that manually turns the baby from the breech position to head-down.

Kim notes, “You should Google the Version procedure. It looks extremely painful and has to be done in the hospital, in case the baby cannot tolerate it. So wish us luck, and pray my baby turns. This whole delivery gives me anxiety, not gonna lie. I hope the baby turns, and all goes well, but I am prepared for anything.”

Kim Kardashian West is reportedly expected to deliver her son in the next few weeks as her due date was moved up to around Thanksgiving day. Don’t forget to come back later for more Kim Kardashian news and updates!