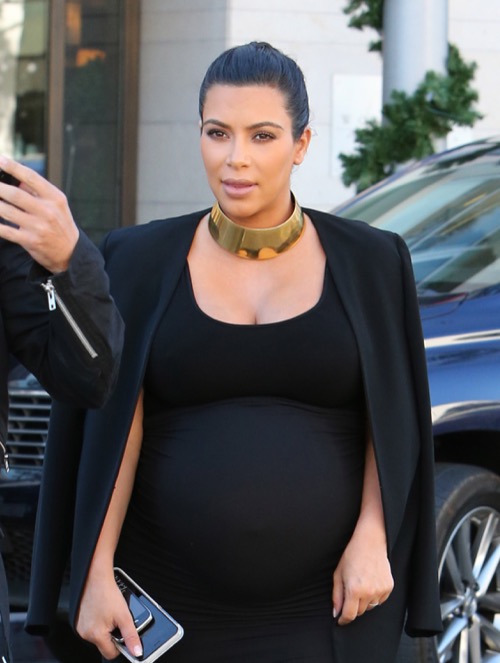 When is Kim Kardashian’s due date? When Kim Kardashian and Kanye West first confirmed that the reality star was pregnant with baby number two, reports claimed that Kim’s due date was on (or around) Christmas day – December 25th 2015. Although Kimye never really confirmed or denied the exact due date, the reports were based on simple math (9 months is the standard pregnancy) combined with inside sources. However, an all new report is revealing that Kim Kardashian’s due date could have been way off – and Kanye Jr. could be here next week!

US Weekly is reporting that Kim Kardashian’s due date could actually be on Thanksgiving (November 26th), not Christmas. And, that’s only one week away! Apparently, Kim’s original due date was around Christmas, but she and her doctors have decided to induce her labor early because of her high-risk pregnancy and potential complications that could arise during birth.

An inside source dished to US Weekly, “Kim’s doctors want to get the baby out early because of her medical history.” It is no secret that after pregnant Kim gives birth to her and Kanye’s baby boy, she will most likely be rushed off to surgery to have her uterus removed. As if that isn’t risky enough, US Weekly is also revealing that Kim’s blood pressure is dangerously high, and she has developed gestational diabetes. It’s no wonder the doctors want to get the ball rolling and get the baby out sooner rather than later.

Neither Kim nor Kanye West have even mentioned the due date in December or possible induction – when North West was born the couple was very private, so for all we know Kim could be in labor right now and trying to keep it a secret. Do you think that Kim will have the baby boy early? Now is your last chance to get your predictions in on North West’s little brother’s name!