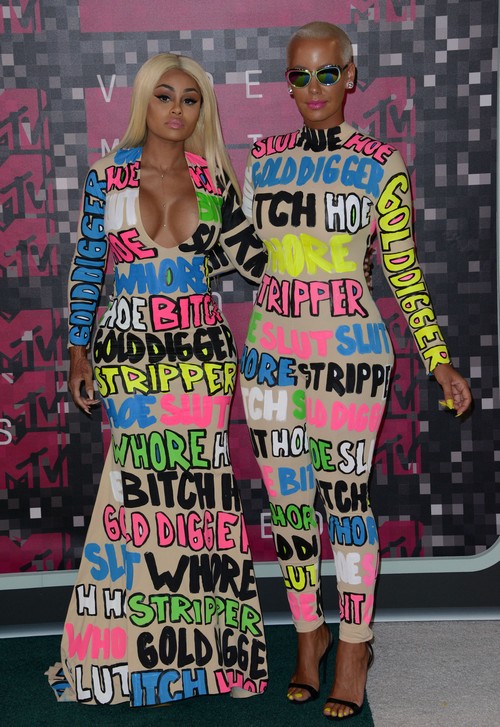 There has been bad blood between Amber and the Kardashians for years – because she dated Kanye West before Kim and says that Kim stole him from her. In early 2015, Khloe Kardashian and Amber got in an epic Twitter battle which resulted in Amber getting called a stripper (which is technically true) and Kim getting called a porn-star (which is also technically true). Blac Chyna has nothing nice to say about the Kardashians considering she was Kim’s BFF up until her little sister Kylie Jenner stole her baby-daddy Tyga.

According to a new report from Radar Online, Kim Kardashian was shaking in her boots when she learned two women that despise her and her family were getting their own TV show – a platform to air all of the Kardashians dirty laundry. Kim tried to stop MTV from producing the show, but they wouldn’t give her the time of day – so now Kim and Khloe Kardashian are taking legal action against Amber Rose and Blac Chyna.

An inside source dished to Radar, “Khloe and Kim confronted Amber Rose regarding her and Blac Chyna’s reality show. They told them that if that they will to whatever is necessary to prevent them from harming the Kardashian family and spilling their secrets. They are terrified that the two of them will use their platform to make it a non-stop Kardashian bashing fiasco. The Kardashians have asked Amber and Blac politely several times to please not make it an anti-Kardashian show.” The insider goes on to say that Kim and Khloe actually are taking legal action against Amber Rose and Blac Chyna, the sisters had their lawyers draw up cease and desist letters and are ready to serve them the moment that the reality TV show airs.