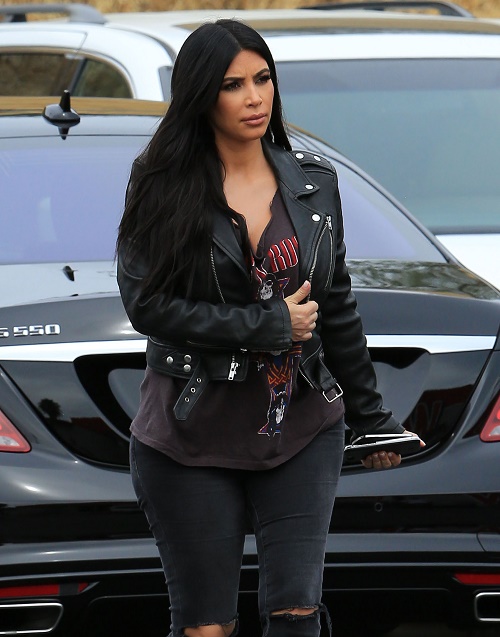 Kim Kardashian is a plastic surgery fanatic, and even a little thing like a pregnancy and growing a human in her stomach doesn’t seem to get in the way of her regularly scheduled Botox injections. It’s no secret that Kim Kardashian gets work done, but when the star stepped out after confirming her pregnancy with a noticeably different face, the internet was in an uproar. Obviously, getting chemicals injected into your face while you are pregnant is a huge “no no,” but it didn’t seem to stop the Keeping Up With The Kardashians star.

In Touch Magazine reached out to Kim’s reps, and they insisted that she hadn’t had any work done to her face since learning she was pregnant. But a plastic surgeon analyzed the newest photos of Kim compared to ones taken before she confirmed she was pregnant – and he is not buying it. Dr. Matthew Schulman dished in the July 13 edition of In Touch Magazine, “It appears that she has had Botox to her forehead and in between her eyebrows. Her cheeks are rounder and her cheekbones are higher, suggesting fillers such as Juvederm or Restylane. It looks like Kim has had lip fillers, they are fuller than we have seen in old photos.”

Although Kim Kardashian maintains that she is au natural while pregnant, the evidence says otherwise. Obviously, you have to take into consideration that her face is getting rounder and she is packing on the pregnancy pounds at a rapid weight, just like when she was pregnant with North. But, seriously, how much weight do one’s lips gain while they are pregnant? Do you believe that Kim doesn’t get any work done on her face for 9 months while she is pregnant? Or is it pretty obvious she is still sneaking off to get Botox? Let us know what you think in the comments below!