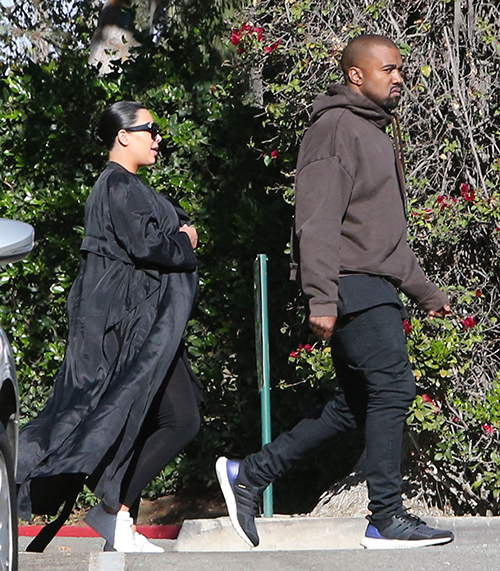 Kim Kardashian is experiencing a postpartum nightmare. Kanye West is allegedly obsessed with newborn Saint West and the new parents are fighting all the time. No one has ever accused Kanye of following the pack. But West may have given new meaning to odd behavior after the birth of his son. There are claims that not long after Saint’s birth on December 5 Kanye took the baby boy and raised the little one high above his head. A family source said it was “exactly like the beginning of ‘The Lion King.”

All of Kanye’s attention was focused on Saint even though Kim was in unbelievable pain following the little guy’s birth. Did Kanye notice? According to sources, West forgot Kim was even in the birthing suite. Kanye told everyone that the newest addition to the family is a prophet sent down by late mother Donda West to deliver truth to the world. Kayne believes Saint West is a pharaoh.

When it came to naming the baby, an insider revealed that Kanye didn’t let Kim have any input whatsoever. West reportedly is still furious that Kim didn’t give him any input in naming daughter North West – Kanye wanted the couple’s daughter named after his late mother. Kanye totally overruled Kim’s name choice this time around. Kim wanted to name the boy Robert to honor her late father.

Talk about selfish! Kanye was allegedly furious that there was any discussion at all about the newborn’s name. West “stormed out of the room and left Kim alone for hours,” those in the know told In Touch. Already having a postpartum meltdown, Kim grudgingly agreed to call the couple’s baby boy Saint just to shut Kanye up. A friend of the family says that Kim and Kanye are fighting all the time and it’s doubtful that the couple will “make it into the new year.” It’s not just over the baby’s name – there are numerous problems in the marriage.

If Kanye West stormed out on Kim Kardashian not long after the “Keeping Up With The Kardashian” star gave birth to the couple’s second child, things can only get worse from there, right? Sources close to the family revealed that Kim is settled at home with baby Saint but is overwhelmed by postpartum baby blues, freaking out about losing the 60+ pounds gained during the pregnancy, and petrified her marriage to Kanye West is O-V-E-R.

Let us know what you think in the comments section below and come back to CDL for the latest celebrity news and gossip!