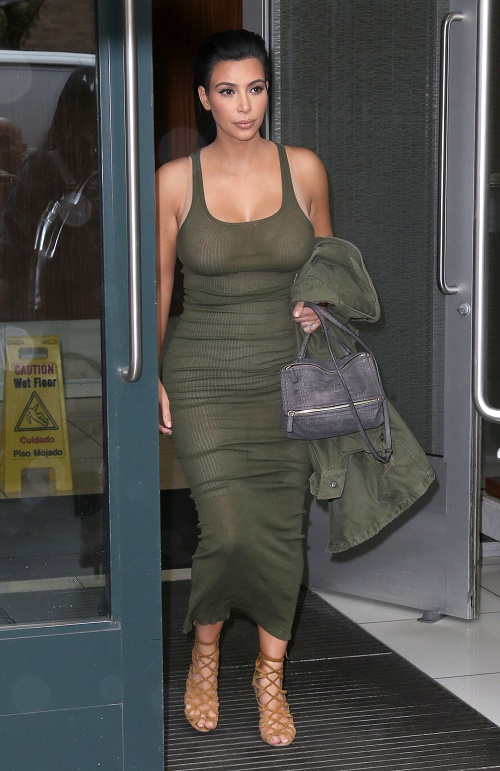 Kim Kardashian is pregnant with baby number two with husband Kanye West. The reality TV star revealed the news on Sunday, May 31 on an episode of Keeping Up With The Kardashians. After her pregnancy news made its rounds, Kim and Kanye attended the CFDA Fashion Awards on Monday, June 1 – and Kardashian spilled some details of her pregnancy, revealing that she is suffering from horrible morning sickness.

At the CFDA Fashion Awards, Kimye stopped to chat with some reporters, and Kardashian raved about being pregnant again. However, the second time around for the mother of North West has been no walk in the park, and she revealed that she has had some terrible morning sickness. Kim explained to US Weekly, “To be honest, I’ve had really bad morning sickness, day sickness, night sickness — I can barely get out of bed. It’s a very different type of pregnancy from my first one, but I’m so grateful to be pregnant when we didn’t even think it was going to happen for us so I don’t care how sick I am.”

Kim Kardashian’s pregnancy woes are just beginning. In a recent episode of Keeping Up With The Kardashians, Kim visited her doctor and learned that if she does manage to get pregnant again, it will be a high-risk pregnancy because when she was pregnant the first time, North’s placenta grew in to her uterus. Kim was shocked when the doctor informed her that if she gives birth to baby number two they will have to rush her off to emergency surgery afterwards and remove her uterus. Kim may have major morning sickness now, but her pregnancy is only going to get more difficult as she progresses and her baby bump grows.

What do you think of Kim and Kanye having a second baby? Is it the son that Kanye always wanted? How many more appearances do you think Kim will make before she is put on bedrest? Let us know what you think in the comments below!