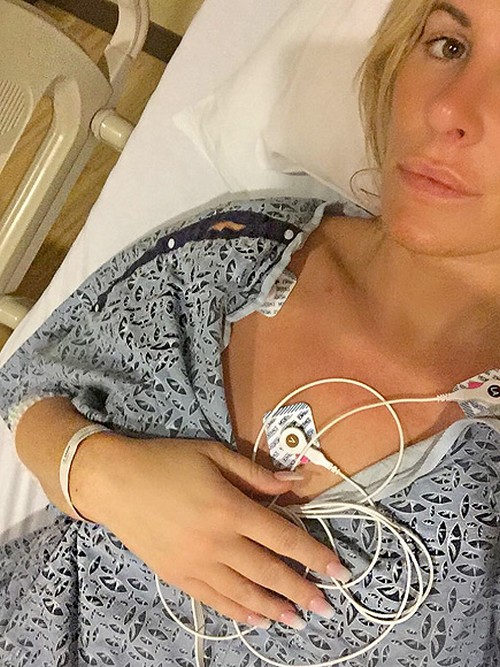 Dancing With The Stars contestant Kim Zolciak is currently waiting to be released from the hospital, the former Real Housewife of Atlanta star has confirmed that she had a mini stroke and temporarily lost the use of one half of her body – and her speech. Kim Zolciak, a mother of 6, was rushed to the hospital as soon as she returned home from her DWTS performance Tuesday night – but it looks like she is making a full recovery and will be on her way home to her family some time today.

Kim Zolciak shared this message on her Instagram page to let her fans know what happened: “The last 24hrs have been whirlwind! I landed yesterday morning from LAX (took the red eye right after DWTS) I got home and within minutes suffered a TIA (mini stroke) the left side of my body went completely numb and my speech was gone. Extremely grateful for @sladeosborne @briellebiermann @nikitpressley @kroybiermann for quick reactions! I have 100%of my feeling back THANK GOD. Still in the hospital but I just know I’m getting released today! ????????????????. #CrazyAgeDoesntMatter.”

Kim Zolciak’s Dancing With The Stars premiere this month was a shaky one, and she and her pro partner Tony Dovolani received the lowest score of the night. In Week 2 of the DWTS, Kim and Tony redeemed themselves – and looked like they may even be serious contenders for the Season 21 Mirror Ball Trophy.

It’s unclear yet whether or not Kim will be dropping out of the competition after her mini stroke. It seems like grueling hours of dance rehearsal and jetting from the West Coast to the East Coast twice a week may not be healthy for someone who just suffered from a stroke. CDL will keep you posted on Kim Zolciak’s health – and whether or not she is dropping out of the competition.