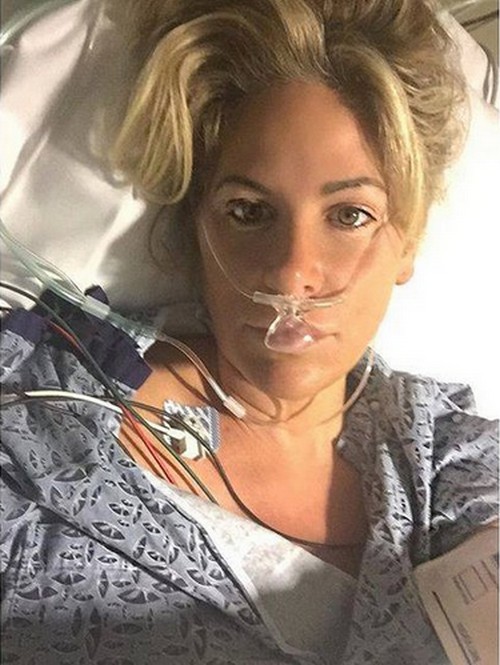 Is Kim Zolciak returning to Dancing With The Stars? The former Real Housewife of Atlanta shocked DWTS fans last week when she announced on Instagram that she was in the hospital – and she had suffered from a mini-stroke after her performance Tuesday night. Although Kim Zolciak has reported that she is home with her family and recovering – she won’t comment on whether or not she is returning to Season 21 of Dancing With The Stars, and neither will ABC. But, according to a new report from TMZ, Kim’s health is much more serious than she is letting on, and the odds of her returning to DWTS are slim to none.

Kim Zolciak gave an official statement to E! News regarding the status of her health. In the statement Kim disclosed, “I want to thank everyone for their love and support over the past few days. I am now home with my family, resting and taking care of my health. I can’t express enough how much I love dancing and this whole experience, and I hope this will not be the end of dancing.”

According to a new report from TMZ, Kim actually underwent heart surgery on Friday September 25. Apparently, while Kim was hospitalized for her mini stroke, the doctors noticed that she had a very serious heart condition, and she underwent surgery to repair it. The website dishes, “Kim has told friends that doctors thought she could be released almost immediately, but a test revealed there was a more serious, underlying heart issue. Doctors kept her in the hospital and she told friends the docs performed a procedure Friday. We do not know the nature of the problem or what doctors did to correct it.”

Kim may be home now, but the woman just underwent heart surgery 3 days ago – there is no way the doctors are going to clear her to return to the Dancing With The Stars stage any time soon. And, even if she were a medical miracle, and was fit to perform – she has been in the hospital all week and she and her pro partner Tony Dovolani have not been rehearsing, there is no way they are anywhere prepared to compete this week.

When Kim stated, “I hope this will not be the end of dancing,” she most likely meant dancing in general. With a heart condition, surgery, and a mini-stroke under her belt, it could take her months to recover enough to just dance in her livingroom.

Have you been following Kim’s story in the news this week? Do you agree that her run on Dancing With The Stars has come to an end? Or do you think she still might return after a few weeks? Let us know what you think in the comments below!

Update: Kim Zolciak is formally off tonight’s DWTS episode – her future with the season 21 show remains murky. Doctors advised that training and travel are out for the time being. We wish Kim a speedy recovery.