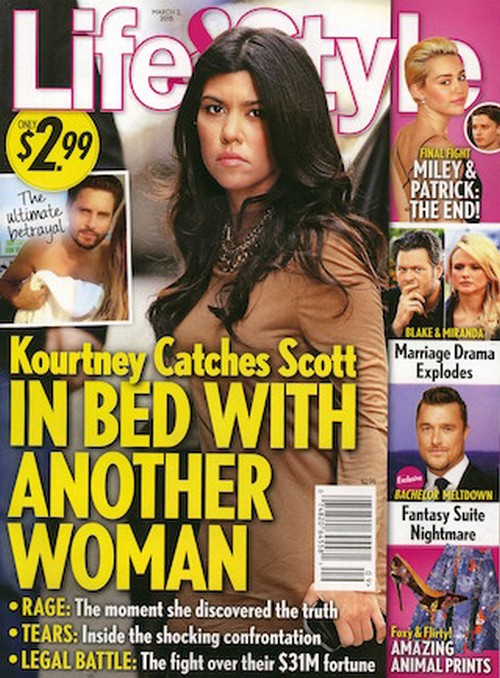 Kourtney Kardashian and Scott Disick are still together, for reasons that are really not very clear to me. Scott Disick has proven time and time again that he can’t be relied upon to be a consistent husband or a father, and he’s been struggling with an alcohol addiction for far too long now. In fact, Kourtney even kicked him out of the house for a temporary period last year, and while it seemed like he got back on track immediately after, his brief sobriety turned out to be a false alarm.

The new cover issue from Life & Style also suggests that in addition to Scott’s drinking problem, he has a cheating problem – specifically, that he keeps cheating on Kourtney Kardashian. Apparently, Scott committed the ultimate betrayal when Kourtney caught him bed with another woman – who just happened to be Kourtney’s sister, Khloe Kardashian. Life & Style’s source explains, “Kourtney found him watching movies in bed with Khloe. Scott immediately freaked out and jumped out of bed. He swore they weren’t doing anything inappropriate.”

We already know that whenever Scott goes to party without Kourtney, he tends to get a little crazy and touchy-feely with other women. In fact, rumors about his cheating have been rampant for the past year, and this kind of media speculation never holds for long without some basis in fact. We have eyewitness reports and people who have seen Scott flirting and hooking up with other women, even though he and Kourtney are supposedly still together.

It could be that both Kourtney and Scott have agreed to keep up a facade for the sake of their show, and they’re secretly separated. However, that doesn’t explain Kourtney’s defeated attitude concerning her baby daddy, and why she still refuses to let him go.