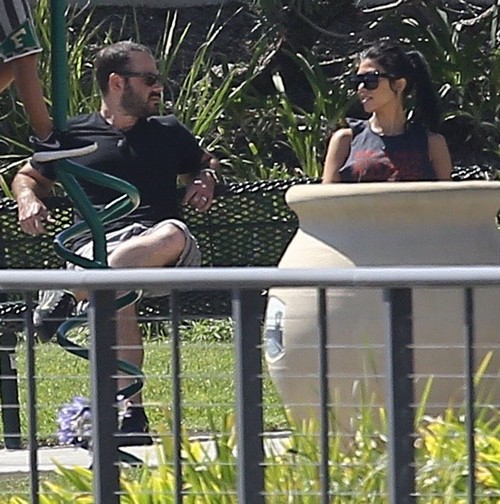 Kourtney Kardashian’s ex Scott Disick did not take the news of his baby-mama being interested in dating rapper Drake very well. As CDL reported earlier this week, Kim Kardashian and Kanye West are trying to hook Kourtney up with their pal Drake. They think that Drake would be the perfect guy to help her get over her messy break-up with Scott, and Drake has reportedly had a crush on her for years. Sources say that Drake and Kourtney have been messaging each other for a few weeks now, and it’s only a matter of time before they have that first date.

It’s no secret that Scott Disick wants Kourtney back, but it looks like this break-up is the real deal. Scott was already a hot mess before Kourtney dumped him for boozing and cheating, but he has spiraled even farther down in to a dark hole since their break-up. Just when we thought Scott Disick couldn’t sink any lower, he learned about Kourtney and Drake possibly dating – and apparently didn’t take the news very well.

Scott Disick crashed Brody Jenner’s birthday party at a night club this week after he learned about Kourtney and Drake, and he began to party like a wild animal and drink himself in to a stupor. Witnesses at the party dished to various media outlets that by the time Scott Disick stumbled out of the nightclub, he was incoherent, and couldn’t even string his sentences together. A source dished exclusively to CDL, “Scott has been in a dark place since the break-up. But, this is the worst anyone has ever saw him. It’s obvious he got bad news that night, something was clearly bothering him.”

Of course Scott Disick was upset – how can he even compete with Drake? If Kourtney and Drake do start dating, it’s a wrap. There is no way he will ever win her back. Do you think that Kourtney and Drake will make a cute couple? Or should she give Scott one more chance before she starts a new relationship, for the sake of their kids? Let us know what you think in the comments below!

Update: It seems old Drake has competition already for newly emancipated Kourtney! Wasting no time, our much in demand mother of three tried to sneak a meeting with a new potential boyfriend on Saturday, August 15 at the park. Check out the pics below and watch Kourtney in action – note that the mystery man is wearing what appears to be a wedding band!

Kourtney Kardashian and a friend take her kids Mason and Penelope out to ride their scooters in Los Angeles, California on August 15, 2015. The group headed to a park so the kids could play and Kourtney and her mystery male friend could talk. Since her split with Scott Disick, Kourtney has spent most of her time being a mother to her 3 children. Time for a new boyfriend? FameFlynet