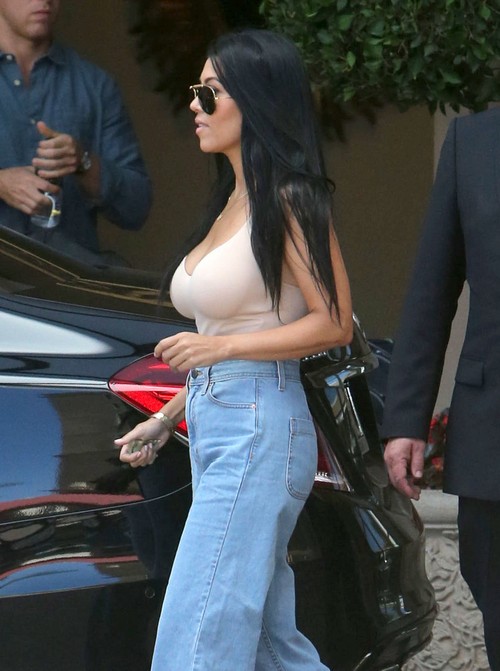 Is Kourtney Kardashian dating Drake? Not yet, but if Kim Kardashian and Kanye West have their way they will be sooner rather than later. Kourtney Kardashian is doing just fine after her break-up from Scott Disick, and she has been posting racy pictures on Instagram to let everyone know. Since the high-profile break-up, we have seen more of Kourtney out and about than we did in the past year. The mother of three and Keeping Up With The Kardashian star is definitely single and ready to mingle, and Kanye and Kim are seeing to it that she mingle with rapper Drake.

According to our Kardashian insider, Drake has always admired Kim’s big sister from afar – and it’s no secret that he had a huge crush on her. Kourtney Kardashian always mocked her sisters for dating rappers and athletes, but after her disastrous nearly decade long relationship with Scott Disick, she is starting to think that Kim Kardashian and Khloe Kardashian were onto something. The insider dished, “Kim and Kanye have been hounding Kourtney to go on a double date with them and Drake. Kourtney is actually open to the idea, the only reason it hasn’t happened yet is basically logistics – it’s nearly impossible to find a night that all four of them are in the same town and free.”

We’re a little skeptical, it’s hard to imagine Drake and Kourtney having much in common. But, we are all for it if it means they will knock Kim and Kanye off their self-appointed pedestals. How funny would it be if Kimye hooked up Drake and Kourtney, and they became a bigger super couple than Kim and Kanye? Do you think Drake and Kourtney will hit if off? Or will the thought of playing step-daddy to three kids scare off the rapper? Let us know what you think in the comments below!