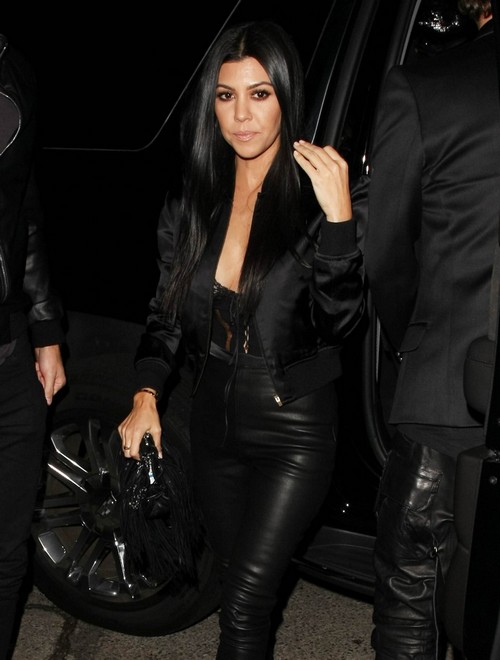 Kourntey Kardashian and Justin Bieber have started a new round of rumors after the two were spotted getting friendly at Kendall Jenner’s birthday party. This isn’t the first time the Biebs has been caught getting cozy with Kourtney. Now some are thinking Kourtney Kardashian might be using Justin Bieber to get over Scott Disick.

At Kendall Jenner’s birthday party, Kourtney and Justin were seen spending quite a bit of time together. The friendly neighbors definitely were at ease with each other as they danced and partied it up at The Nice Guy in Los Angeles.

Justin Bieber posted a photo to Instagram of himself and a few friends that was taken at Kendall’s party. Kendall and Kylie Jenner were seen in the snap with the Biebs but it was Kourtney Kardashian who was front and center in the photo.

Even though Bieber captioned the photo, “What a beautiful family inside and out happy birthday Ken,” we’re pretty sure he had Kourtney on his mind.

Ever since her split with Scott Disick, Kourtney Kardashian has been turning on her inner cougar and we’re not surprised that Justin Bieber couldn’t resist. Kourtney went all out to prove she still has it in a skin tight black outfit that left little to the imagination.

Kourtney Kardashians very low cut black lace-up bustier would have been inappropriate had Kourtney not paired it with a black silk bomber jacket. The oldest Kardashian’s look was completed with tight black leather pants and lace up heels that gave off a biker-chic vibe.

All of the Kardashian and Jenner sisters wore black to the party and still managed to look very fashionable but Kourtney had no problem keeping up with her younger sisters.

This isn’t the first time that Kourtey Kardashian and Justin Bieber have been seen out and about together. In October, Celeb Dirty Laundry reported that Justin and Kourtney were seen together and coincidentally it was at the very same restaurant, The Nice Guy.

Justin and Kourtney showed up to the restaurant separately the first time they were spotted out in Los Angeles. According to reports, Kardashian and Bieber were actually at the upscale eatery with two different groups but tongues started wagging when Kourtney Kardashian jumped in Justin Bieber’s car and caught a ride home. The (possibly not) accidental but very well-timed meetup just seemed way too premeditated.

Kourtney Kardashian and Justin Bieber were also spotted at Universal Studios together. At that point, the pair weren’t even trying to hide their escapades. Justin posted a picture from the Universal Studios trip to Instagram. The photo showed himself and Kourtney Kardashian wearing 3-D glasses during the theme park’s annual Halloween Horror Nights.

Justin Bieber claims to just be a really good friend of the Kardashian and Jenner family. He does have a history with Kendall and Kylie. On top of that, Bieber is Kourtney Kardashian’s neighbor so they run into each other anyway.