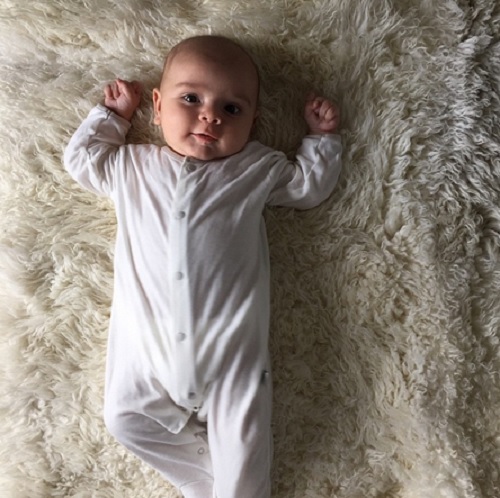 Kourtney Kardashian has been dealing with the PR mess that Scott Disick has left her in the wake of his drinking problem and his cheating allegations. Even though she’s tried her best to put on a brave face to the public, she did just give birth to another baby with Scott, son Reign Aston Disick. Obviously, this has been a difficult time for her, but if there’s anything the Kardashians are good at, it’s PR control.

Kourtney recently shared an Instagram photo of little Reign Aston Disick, probably hoping to distract from all the negative press that has surrounded her and her family recently. She captioned the photo, “My little turtle dove angel baby boy Reign Aston Disick.”

The baby is adorable, but it also reminds us of the fact that Scott Disick is conspicuously absent from the photo. Kourtney used to be all about the family PR photos, but they have vastly reduced over the past year – and understandably so. She can’t exactly host a publicity stunt when Scott is in Vegas, drinking and partying as though there’s no tomorrow. Meanwhile, Kourtney’s had to hold on for her new baby and her two other children, all while Scott pretends as though he doesn’t have a family.

Sure, right now Scott Disick is going back to rehab – and he’s said as much. But will it actually last this time? And is his reputation irreversibly ruined after his drinking and drug issues have gone public? Kourtney can post all the pictures of little Reign Aston Disick that she wants, but at the end of the day, a cute baby isn’t going to make people forget that her baby daddy is an alcoholic.

What do you guys think about Kourtney’s Instagram photo of Reign, and her blatant PR attempt at fixing their image? Let us know your thoughts in the comments below.