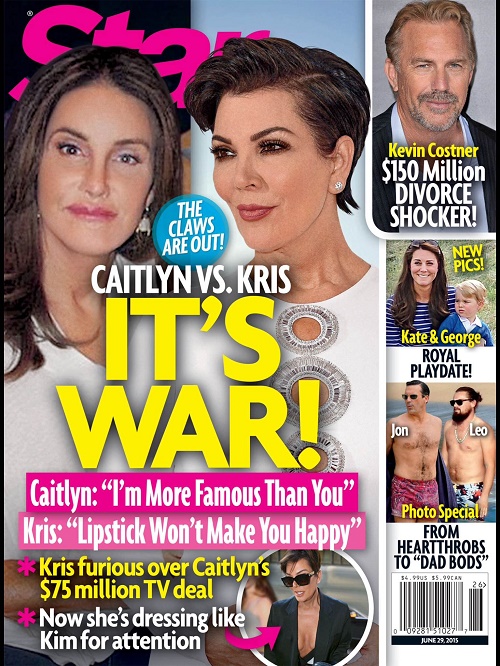 Kris Jenner has spent the past decade trying to compete with her own daughters. She probably never thought that she would have to worry about Caitlyn Jenner (formerly Bruce Jenner, her ex-husband) giving her a run for her money. The bitter feud between Caitlyn Jenner and Kris Jenner is really starting to heat up, and we can’t wait to see which diva comes out on top.

Kris Jenner’s bottom line is always money. Let’s not forget this is the same woman who financially cut off her daughter Kylie when she was just 14 years old. Kris’s biggest beef with her former spouse Caitlyn Jenner is the fact that Caitlyn is making boatloads of cash – and Kris isn’t seeing a dime of it. Last year before Caitlyn Jenner’s transition was official, she fired Kris and hired a real manager – Alan Nierob.

According to Star Magazine’s inside sources, “Kris is furious that someone else is reaping all of the money from Caitlyn’s success. She feels like she stood by Bruce for 25 years and the least Caitlyn could do is keep her on as her manager. It’s the ultimate betrayal in her eyes.” When you put it like that, Caitlyn does seem a bit shady for firing Kris right before the real money started rolling in – but let’s not forget, this is Kris Jenner. Kris Jenner, as in the same woman who emotionally bullied Bruce for those 25 years because he wanted to be a woman, and the same Kris Jenner that said in interviews that it was “silly” for Bruce to transition.

The money is just the tip of the iceberg though. The Caitlyn Jenner and Kris Jenner feud will unfold right before our eyes on national television. May the best woman’s reality TV show win! Kris has two eyes: she can see the buzz that Caitlyn is catching and everyone knows the ratings on her new show “I Am Cait” are going to be huge. To add insult to the injury, all of Kris’s daughters and basically the entire cast of Keeping Up With The Kardashians have agreed to appear on Caitlyn’s new show.

The June 29 edition of Star Magazine reveals, “People are way more interested in Caitlyn right now than they are in Kris, so she is afraid it will affect the ratings of her show. And if ratings dwindle, Kris feels that daughters Kim, Kourtney, Khloe, Kendall, and Kylie will all jump ship, choosing Caitlyn’s show over their mom’s.”

At this point, we have zero pity for Kris Jenner. You know what they say about Karma. You can’t be a greedy narcissist who uses and abuses your own family members for fame and money forever – and not expect anything bad to happen to you in return. Do you think that Caitlyn’s reality TV show could be the demise of Keeping Up With The Kardashians? Let us know what you think in the comments below!