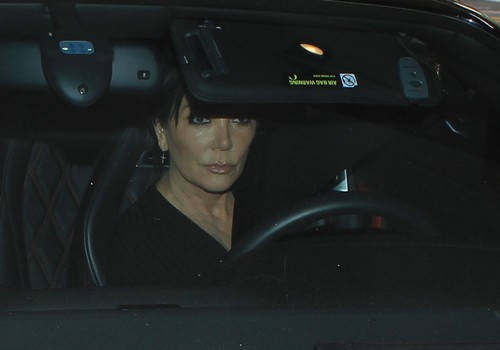 Kris Jenner ignored Kanye West’s ban on the hospital while Kim Kardashian was giving birth and stayed with her famous daughter throughout the labor and delivery of her new grandson, then made a return trip to the hospital the very next day.

Kim ended up having her baby boy a few weeks early and Kanye wasn’t around to rush his wife to the hospital. Thankfully Kris was on hand to support Kim throughout the whole ordeal. Now Jenner is taking advantage of the fact that she saved the day and is visiting Kim and her currently unnamed son whenever she wants.

Initially Kanye cited security as the reason for keeping the rest of the family out of Kim’s birthing suite but after the “Only One” singer almost missed the birth of his son, Kanye was probably relieved to have Jenner’s help. Kourtney Kardashian was also at Cedars Sinai for the birth of Kim Kardashian and Kanye West’s brand new little boy.

Kim was worried throughout her labor that Kanye wouldn’t make it to the hospital in time to see his son born. We know that Kim Kardashian wasn’t planning to give birth yet when she was rushed to Cedars Sinai in the middle of the night.

West was in New York City to receive an award for one of his shoe collections. When Kanye heard that Kim was headed to the hospital, he jumped a flight back to California and made it to Kim’s birthing suite just in time for the birth of his child.

Now that the emergency is over, Kris Jenner still isn’t staying away from the hospital room where Kardashian is recovering with her newest baby. Kris was seen arriving for another visit on Sunday, December 6. It looks like Jenner plans to wear out her welcome in the maternity ward because at this point, Kanye West can’t say anything.

If it weren’t for his meddling mother-in-law, Kim would have been all alone in the middle of a medical crisis. Now Jenner is making sure to capitalize on the fact that she was around when West wasn’t and she’s camping out in Kim’s room with her new grandson.

Jenner has been thoughtful enough to keep some of the birth details to herself rather than blabbing them to the media as Kanye initially feared. Then again, the “Mercy” rapper can’t really be mad at Kris Jenner even if she does spill the beans because Kanye himself wants to know the details of his son’s birth since he didn’t show up until right at the very end.

Kris Jenner visits Kim Kardashian and her brand new baby at a hospital in Los Angeles on December 06, 2015. FameFlynet