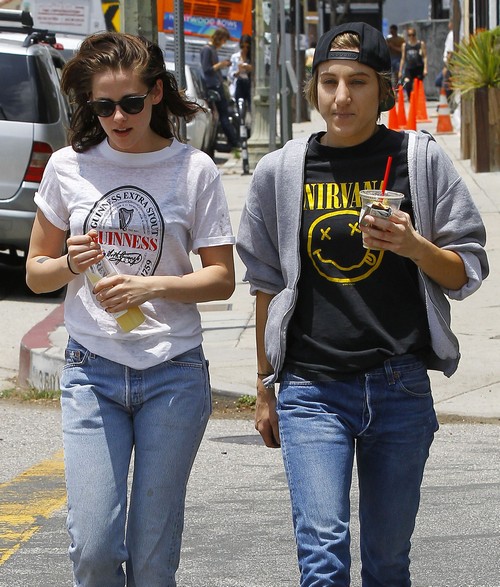 Did Kristen Stewart and her girlfriend Alicia Cargile get married? Kristen Stewart stepped out for her American Ultra premiere party in August, and her brought her pal Taylor Lautner along as her plus one. According to a new report, the reason K-Stew didn’t bring Alicia is because she was trying to keep the fact that they had just had a secret wedding quiet. Apparently, after a few glasses of champagne Kristen confessed that she was a married woman!

An insider at the movie premiere dished in this week’s edition of OK! Magazine, “Kristen slipped up and said ‘I miss my wife.’ When I congratulated her on getting married she gave me a quirky smile and coyly said ‘Thanks!’ before she ran off to celebrate with her friends and costars, who were hugging her and congratulating her all night.”

It sounds like Kristen and Alicia’s secret wedding might be one of the worst kept secrets in Hollywood. No one is exactly shocked by them tying the knot – they were already living as practically a married couple, and they worked together 24/7. In all actuality, they probably spent more time together before they said their “I Do’s” than a typical married couple. Another inside source dished to OK! Magazine, “Those close to Kristen aren’t surprised that the pair secretly wed. Kristen has been saying that Alicia is ‘The One’ for the longest time. They just get each other and that’s what makes them work.”

On the bright side, FKA Twig can finally stop losing sleep stressing over Kristen stealing Robert Pattinson back – she’s a married woman now! Although, it is pretty hilarious that K-Stew tied the knot before her ex, when you take in to consideration how long they have been engaged. Do you think that Kristen and Alicia Cargile are in it for the long haul? What was their secret wedding like? Let us know what you think in the comments below!