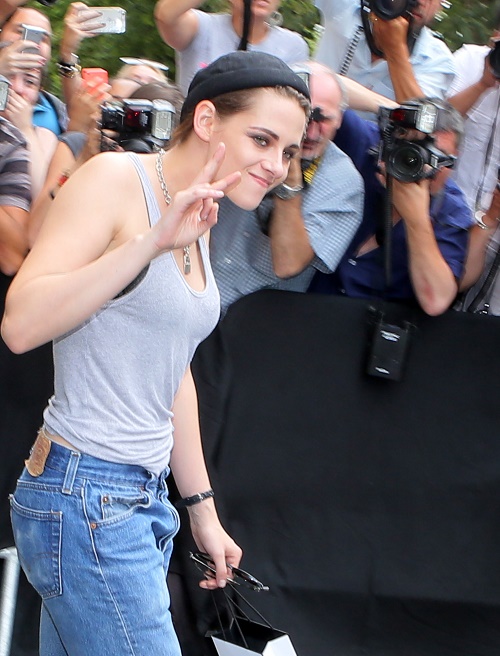 Kristen Stewart’s girlfriend Alicia Cargile is running her life! When Kristen Stewart and her live-in girlfriend/personal assistant Alicia Cargile first began dating, it was obvious who was running the show. After all, Kristen was the one signing Alicia’s paychecks, and footing all the bills. But, according to a new report, the tables have officially turned, and Kristen Stewart has become totally dependent on Alicia – who is basically running her entire life for her.

The July 20 edition of Star Magazine reveals, “At first Alicia was just reading over scripts for Kristen, and helping her make decisions for movie roles. Now, she makes sure Kristen’s bills are paid, arranges their dinner plans, and even answers her phone! Kristen gets completely overwhelmed when she is working on set. With Alicia around, Kristen can just concentrate on her acting.”

Does anyone else think that this is just one epic disaster waiting to happen? First of all, it is never healthy to mix business with pleasure, and if K-Stew and Alicia do break up, Kristen’s entire life will fall apart – not just her romantic life. Say Alicia packs her bag and skips town – Kristen is going to be bouncing checks left and right, possibly starving to death because she can’t even get her own food, and won’t even know which set she is supposed to be showing up at and when. And, not that anyone cares, but Alicia Cargile will be completely screwed too. She just dedicated the last 2 years of her life to Kristen’s life, what will she have if she and Kristen are over?

As of right now, Kristen and Alicia seem to be in a good place, and let’s hope for both of their sakes it stays that way. Do you think that their relationship is a disaster waiting to happen? Would K-Stew even be able to function if Alicia Cargile wasn’t around to run her life for her? Let us know what you think in the comments below!