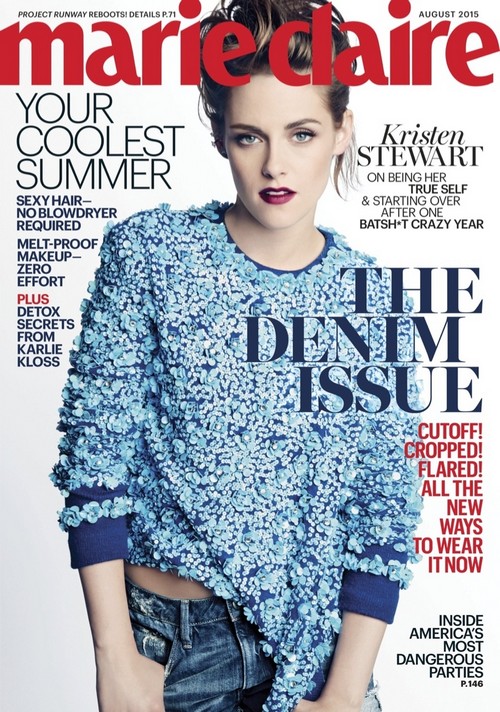 Does Kristen Stewart think that the length of her hair is more significant than cheating on Twilight boyfriend Robert Pattinson? Read KStew’s interview in Marie Claire August 2015 and see what you think. Kristen Stewart should know by this point at age 25 how to dust off the dirt and portray more of a serious-minded person. Give or take the benefit of doubt, 20 year olds and especially some teenagers are dysfunctional, and seem anything other than smart socially, and in their personal behaviors. Kristen Stewart, former Trampire and now Alicia Cargile’s enlightened lesbian lover, certainly fits the bill. Kristen Stewart treated fans and detractors to another rambling pseudo-intellectual interview, this one courtesy of Marie Claire August 2015.

Meanwhile, yes, Stewart’s stock of skills are numerous as an American Actress starring in various films. Therefore, was Stewart more of a jerk then and today is trying to make up for her shortcomings, – not be the star fans portrayed her to be in the Twilight film series when after getting roped into a showmance with Robert Pattinson by producers she then cheated with the older director, Rupert Sanders?

Stewart may need to make it known to teenagers and individuals in their early 20s that it is not the end of the world not knowing the outcome to every issue. Kristen Stewart could be sending the wrong message if you are in that age range that it is okay to make yourself ill with worry until you reach a later mature age.

By all means some kudos to Stewart for her overwhelming revelation found now in her age of so called wisdom. And how much wisdom could Stewart have at this juncture – would you trust her prudence to handle your personal affairs?

And as we know change is inevitable, which means Stewart cutting her hair gives no creed to the theory that hair exemplifies ‘sex appeal.’ Well, what is Stewart going to do now if the majority still found her sexy with short hair?

We may wager Stewart is not going to keep her short hairdo in lieu of appearing sexy. Once Stewart goes past this personal hurdle in her life there will be new grounds to conquer, and what we may see in Stewart could be a short lived motto?

Currently, it is difficult to believe the validity of her interview in terms of what guides Kristen Stewart’s ideals but time will tell how serious the Twilight star is.