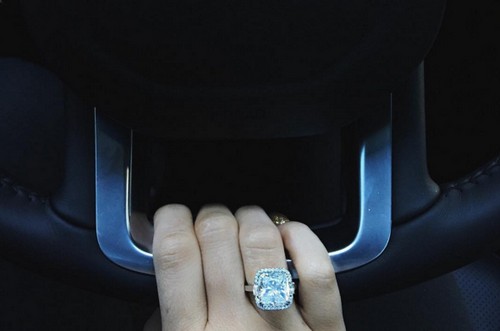 Kylie Jenner got a huge engagement ring for Christmas from Tyga and she’s showing it off all over Instagram. The problem is, Jenner won’t admit that Tyga proposed or that a marriage to the rapper is coming.

On Christmas Day, Kylie posted a photo to Instagram that showed of a huge rock on her right ring finger. Jenner only captioned the photo with a Santa Claus emoji, leaving fans to speculate about the special gift. The diamond engagement ring is really big, easily several carats. If it’s real, Kylie Jenner’s new bling probably used up whatever cash Tyga had left.

Jenner also posted a picture of the enormous ring to her personal website. Kylie gave more information about the new ring on her website. “Every year my Mom throws a huge Christmas Eve party and this years was so fun (and sparkly)! It was really special to end such a big year celebrating with all of my friends and family… and with an extra special gift from a special someone,” Kylie wrote on her website. “And NO, I’m not engaged :)”

Kylie was gifted the huge diamond engagement ring just one day after pictures surfaced of the reality star in a lip lock with Tyga. Jenner took her rapper boyfriend to Kris Jenner’s annual Christmas Eve party. Kylie and Tyga destroyed all breakup rumors by making out heavily during the party. Pictures of Jenner’s PDA session with Tyga are popping up on blogs all over the Internet.

Kylie Jenner’s new diamond ring isn’t as big as Kim Kardashian’s 15-carat ring from Kanye West. We know that Kylie is very competitive with her big sister Kim. Kylie won’t be happy unless her engagement ring is at least as big as the one Kanye picked out. Is that why Kylie won’t admit that Tyga proposed on Christmas?

It’s also possible that Kylie’s new ring is more of a promise from Tyga than a proposal. The reality star and her rapper beau have been on the outs since Tyga’s birthday, when Jenner reportedly nearly dumped her boyfriend but never told fans why.

Whatever Tyga did (and we have a pretty good idea) must have been really bad because Kylie and her entire family skipped Tyga’s birthday.

In the past several weeks, Kylie Jenner has admitted cooled off her relationship with Tyga. The reality star told Ellen DeGeneres during a recent interview that she and Tyga were “hanging out” when Ellen asked if they were still together.

Based on the huge ring Kylie is rocking, she and Tyga are very much back together. Actually we wouldn’t be surprised at all if Kylie and Tyga are engaged but are keeping their new status a secret until Tyga proves that he’s going to stop messing up.