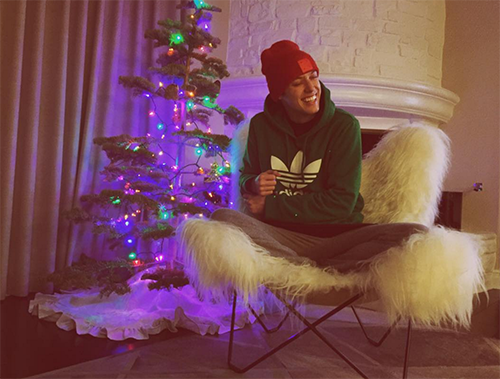 Kylie Jenner is finally over cheating boyfriend Tyga? Did Kylie flaunt new boyfriend Harry Hudson at a recent birthday party? After a Tyga texting scandal was recently exposed, friends say Kylie has reportedly refused to talk to the rapper. Jenner won’t respond to texts, voicemails or messages the on-again-off-again boyfriend sends via social media. Has Kylie finally realized that the guy is no good?

New guy Harry Hudson (pictured above) is an aspiring pop singer who Jenner met through mutual friends. The duo was spotted shopping at an upscale Los Angeles clothing boutique on Dec. 11.

A few days after the shopping spree, Harry accompanied Kylie to the joint birthday party Kourtney Kardashian threw for Mason Disick and Reign Disick. Sources reveal that Kylie and Harry were seen leaving a recording studio later in the evening after the Kardashian family birthday party.

The fashion model began visiting Harry in the hospital in June 2013 – the young man was undergoing treatment for Hodgkin’s lymphoma. Back in 2013, Harry gave an interview and said that Kylie Jenner and Kendall Jenner came to visit when no one else did. Has Kylie and Harry’s friendship turned to romance?

When Harry needed Kylie most she was there for him. Now Kylie needs a friend to lean on – and Harry is right there whenever Kylie needs a shoulder to cry on or an ear to listen. Harry is cancer-free now, and an insider revealed to OK! that Hudson’s battle with Hodgkin’s lymphoma “brought them closer.”

The whispers of what Tyga has put Kylie through over the past few months never seem to end. First, there were reports that the rapper was having an affair with a transgender woman. Most recently, the rapper has supposedly been texting a 14-year-old model based in New York City.

It’s been a rough year for Kylie Jenner. Perhaps Harry Hudson is just what Kylie needs, not just right now, but in the future. Maybe Harry can make Kylie and Kendall Jenner see reason and help the sisters regain the super close relationship they once had.

Let us know what you think in the comments section below and come back to CDL for the latest Kardashian and celebrity news.