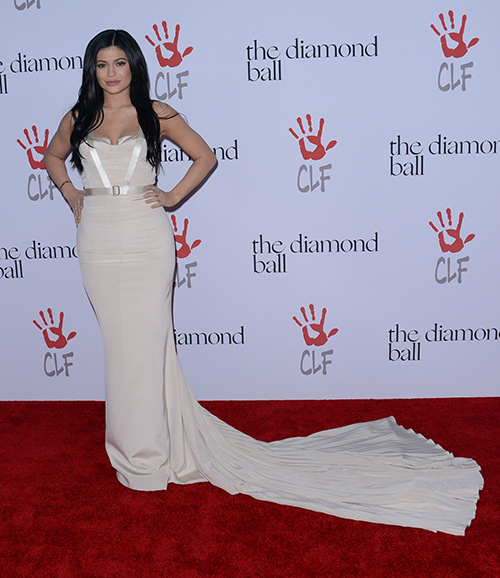 Kylie Jenner and Tyga are broken up and their separate red carpet walks at Rihanna’s Diamond Ball prove the scandalous romance is over after the KUWTK star ignores her rapper ex-boyfriend all night.

Proof keeps piling up that the Keeping Up With The Kardashians star is over her relationship with Tyga and has definitely put the brakes on their relationship. TMZ reported on Friday, December 11 that Kylie and Tyga were keeping their distance at Rihanna’s 2nd Annual Diamond Ball in order to protect their brands. While it makes sense for Kylie to start disconnecting herself from her b-list rapper boyfriend, Tyga has nothing to gain from all this distance.

Kylie Jenner and Tyga arrived separately to Rihanna’s event and not only opted to walk the red carpet separately at the Diamond Ball, they also spent the evening pretending not to know each other. It’s pretty obvious Kylie has broken up with Tyga and we’re watching the final throes of a relationship that never should have happened.

Whatever Tyga did to set Kylie off must have been pretty bad because things haven’t been the same since their end-of-November split that lasted less than two days. Most fans believe Tyga was caught doing something inappropriate with a stripper and that’s why Kylie is refusing to forgive him. It wouldn’t be the first time. Now, it looks like the Rack City rapper was right to fear that his reality star girlfriend might be edging him out. That’s exactly what Jenner has been doing to the Stimulated rapper.

Tyga has been doing everything that Kylie asks in order to win her forgiveness again. It looks like it’s too late though because Tyga is stuck in a no-win situation and it’s really all his fault. If the newly-single rapper does everything Kylie says, she’ll gain the distance she needs to make the split much less painful for herself. If Tyga doesn’t comply with her demands, Kylie Jenner will just cut him off immediately.

Even though Kylie and Tyga haven’t made an actual statement about the end of their relationship, it’s over and there’s really no denying it. At this point, the rest of the Kardashian and Jenner family are just waiting patiently for Kylie to finish what she started and cut Tyga off for good.