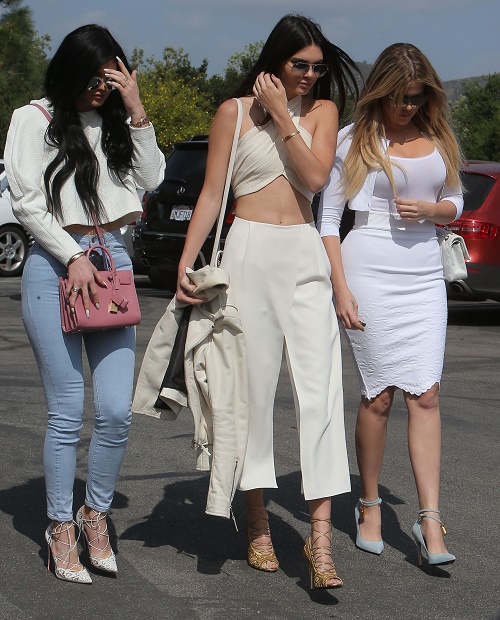 Is Kylie Jenner firing Momager Kris Jenner and hiring her sister Khloe Kardashian to do the job? Anyone who watches Keeping Up With The Kardashians can tell you that Kris and Kylie’s relationship is strained – at its best. In a recent interview with Britain’s Grazia Magazine, Kylie slammed her mother Kris and announced that her sister Khloe Kardashian was “more of a mom” to her than Kris. Kylie’s shameless dig at her momager Kris just supports the rumor floating around the Kardashian circle that Kylie is firing her mom as soon as she turns 18 years old in August – and hiring Khloe to be her new momager!

In Kylie’s interview the 17 year old explained, “I’m closest to Kendall. I spent every second with her growing up. After that it’s probably Khloe. We like the same things. Khloe is more of a mum to me than my mum is sometimes. It was dad who was pretty strict when I was younger. My mum is all about being friends.” Ironically, Kylie’s interview about her and Kris’s less-than-stellar relationship came out just days after an episode of Keeping Up With The Kardashians aired in which Kris admitted she hadn’t talked to her daughter Kylie in two weeks.

According to CDL’s sources close to the Kardashian Family, Kylie is just biding her time until she turns 18 years old in August – and then she is moving out of Kris’s home and firing her. The insider dished, “Kylie and Khloe have already discussed it, Khloe is going to take on her little sister’s career and be her new momager, as soon as she turns 18 and can get away from Kris. Khloe is tired of being in the limelight, she wants to explore the business aspect of things. And Kylie wants someone with experience that she can trust to manage her career. It’s a perfect match.”

Kylie Jenner’s 18th birthday could easily go down as one of the greatest Kardashian birthdays ever – can you imagine Kris Jenner’s face when her daughter moves out, fires her, and then rides off to her love nest with Tyga? Do you think Khloe will be able to manage Kylie’s career, or is this just a disaster waiting to happen? Let us know what you think in the comments below!