Tyga Cheating On Kylie Jenner With ‘Women On The Side’ – Blac Chyna’s Revenge is Sweet? 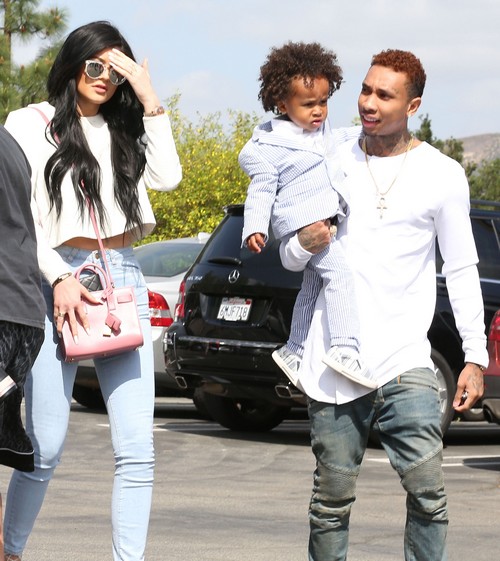 Tyga is cheating on his underage girlfriend Kylie Jenner! Tyga and Kylie have been dating for months now, despite desperate attempts to keep their illegal relationship a secret – Kanye West confirmed that the Keeping Up With The Kardashians star and rapper “were in love” in an interview earlier this year. Once their secret was “out”, not that it wasn’t already obvious, Kylie and Tyga began steping out in public more and he even professed his love for her on social media. But, according to a new report Tyga is a pretty crappy boyfriend, and he has been cheating on the clueless 17 year old.

The April 20th edition of OK! Magazine reveals, “While Kylie’s been dating Tyga for seven months, sources say that she has no clue that she is not the rapper’s only paramour.” The magazine’s inside source explains, “Tyga likes to have his cake and eat it too when it comes to women. When Kylie is around he acts like the perfect boyfriend, but he definitely has some ladies on the side. She is so in love that she convinces herself that he is being honest, but it is only a matter of time before she finds out the truth.”

Oh, Kylie. When will women ever learn that if a man cheated with you, it is only a matter of time before he cheats on you. Rumor has it that Tyga cheated on his wife Blac Chyna with Kylie Jenner before they began officially dating. Kylie would have to be a fool if she thought that she was special and a serial cheater like Tyga would suddenly hang it up and never cheat again. Then again, that’s probably why it is illegal for men to date underage teens and sleep with them– Kylie is only 17 years old, we can’t expect her to see through his lies like a grown woman might.

Are you surprised that Tyga is cheating on Kylie Jenner, or are you just surprised that he hasn’t been caught yet? Do you think his mistresses are some of Kylie’s fellow celebrities? Let us know what you think in the comments below!